Skip to content
When Quinn was in the 2nd grade he came home from school one day and said he wanted to sign up for taekwondo (TKD).  At that time Quinn did not enjoy sports or physical effort but he had seen this TKD school perform a demo during school lunch and he thought it looked super cool.
So we immediately signed him for up TKD.  He was given a uniform but no belt.  Once he learned a set of rules he needed to follow at home, school, and in TKD he was given his belt.

Flash forward 3 1/2 years and that decision he made landed him here. 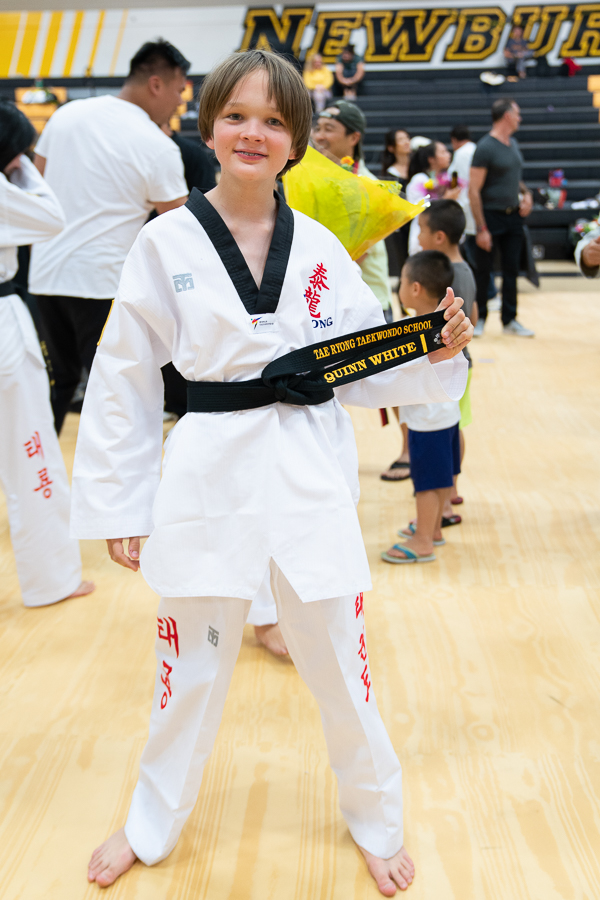 He worked very, very hard over those years and he earned each belt along the way.

Quinn initially went through qualifications in May 2019 but GMYS did not think Quinn was ready.  Quinn took it in stride and vowed to work harder.  Quinn\’s main instruction, Master Stolsig, really worked with Quinn over the next 6 months and Quinn attended class 5 times a week.

Fast forward to October qualifications and Quinn made an impression.  GMYS said he looked stronger, sharper, and more focused. 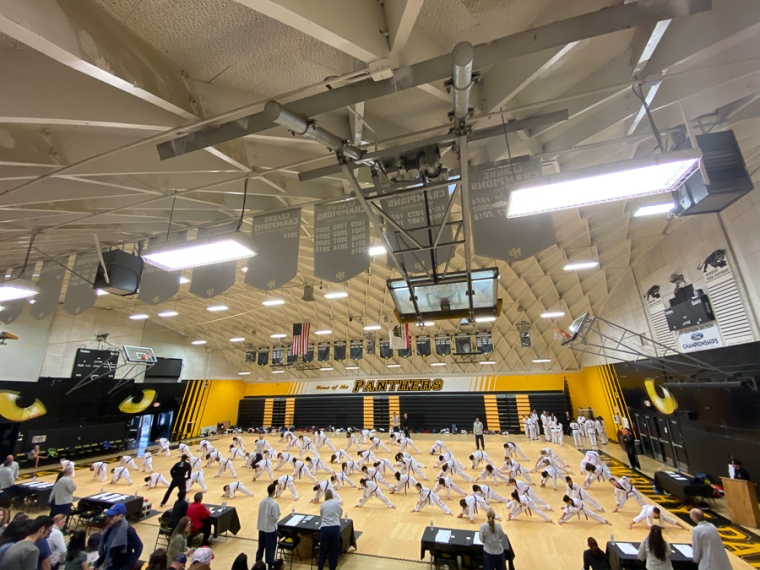 There are 4 stages to testing:  curriculum (punches and kicks), forms, sparring, and breaking boards.

Forms, or taeguek, are \”routines\” using all the moves from curriculum that are also moves you would use to defend yourself.  Each part of the form has a purpose.

There are 8 different forms and they learn one new form with each belt.  To put it in perspective, Quinn had such a hard time learning the first form so we got him a private lesson.   Once he got it, he got it and it stuck.  But he still had to work hard with each new form.

Each form has 12 – 16 moves so it\’s alot of remember.  Here\’s the group going through all the forms.  Another challenge is that the group has to stay together and finish (mostly) at the same time.

After forms it\’s on to sparring.  Not Quinn\’s favorite but it\’s a requirement.

At a previous tournament, Don connected with a black belt named Darrell and asked Darrell to give Quinn some coaching.  Coach him up!  Darrell was at black belt testing and gave Quinn some words of encouragement. 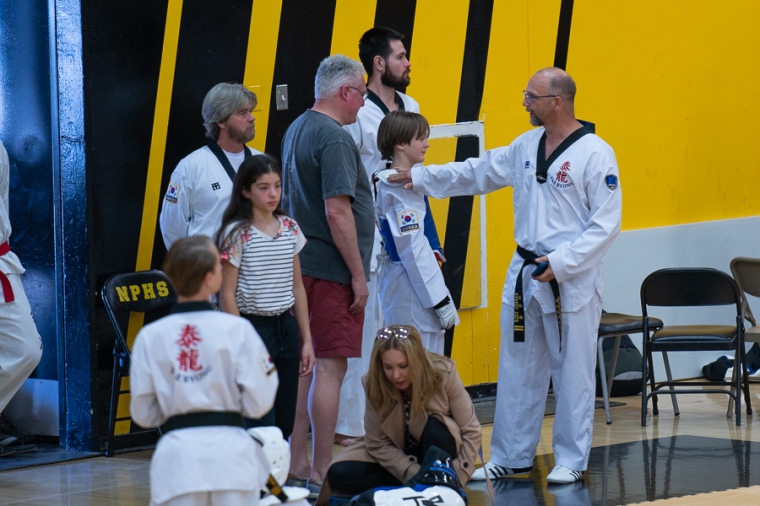 Quinn has a sparring move that I love and it\’s a quick jump on his opponent.  Sometimes it\’s enormously effective. 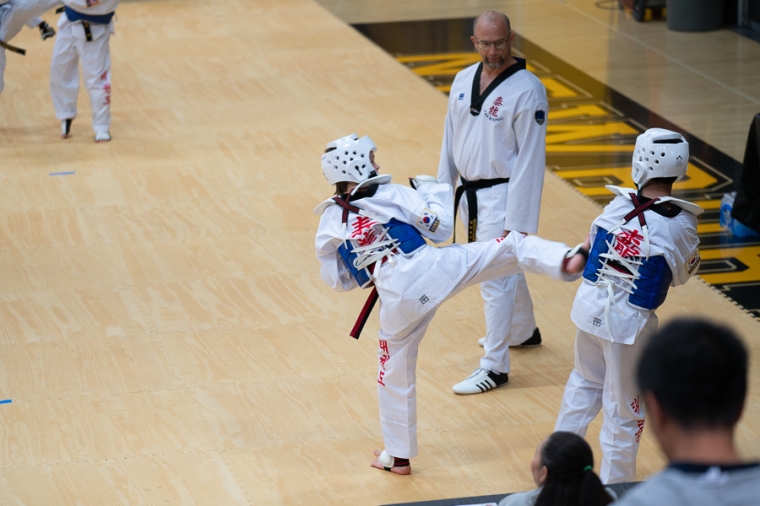 Then on to board breaking.

GMYS asks the kids to sit down and face away from the audience.  He asks them to reflect on how they achieved their black belt and what it means to them.  In the meantime the parents get their kids belt and surprise them with it.  Seeing Quinn\’s face was the full reward.

He was so happy and so proud.  I  have never been more proud of him.  He persevered and worked so hard to earn this belt. 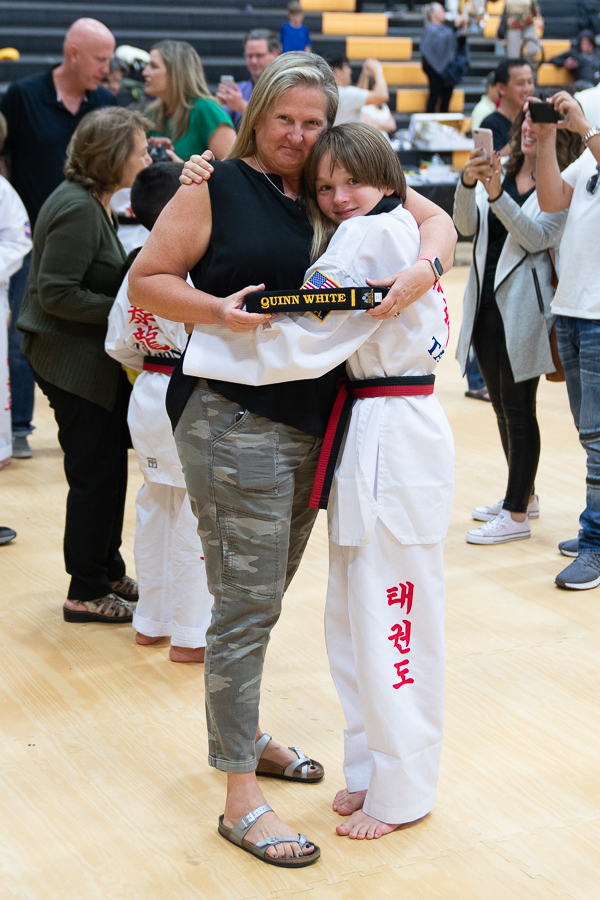 The group from the Thousand Oaks studio.   Some of the adult black belts volunteer and support the younger kids.

Master Stolsig.  He really stuck with Quinn and gave him the guidance and encouragement Quinn needed to achieve his goal.

And now Quinn is moving on to 2nd degree black belt!