An amazing weekend for this great group of kids (although 2 are missing in this pic).  On Friday we left school at 11:30 am to drive to Riverside for the California State Odyssey Tournament. 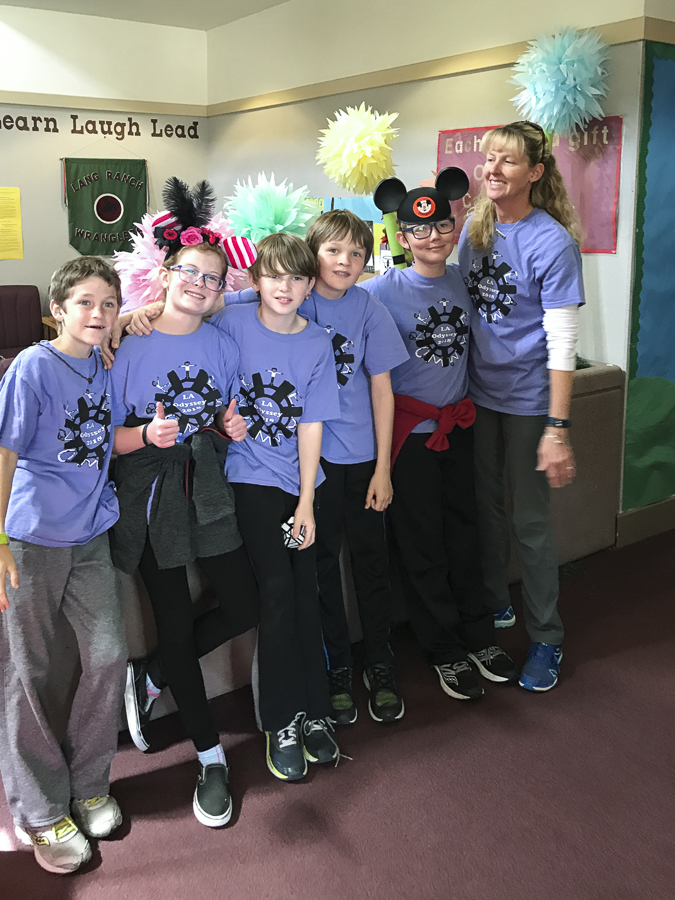 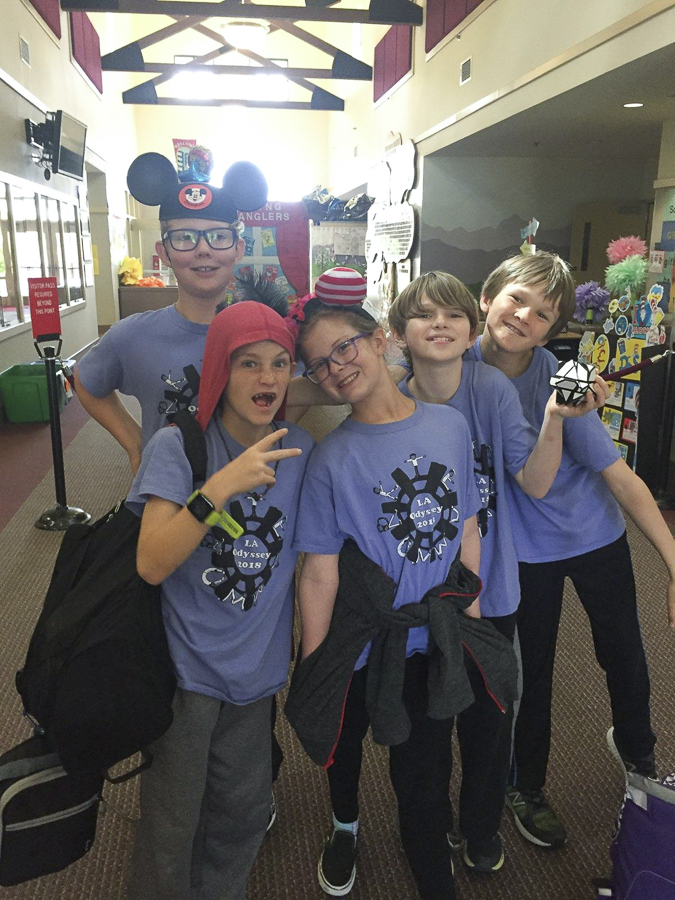 We left early to get ahead of the bad traffic and also for the kids to have some fun together.  This girl  can hold her own with the boys and they love her to pieces. 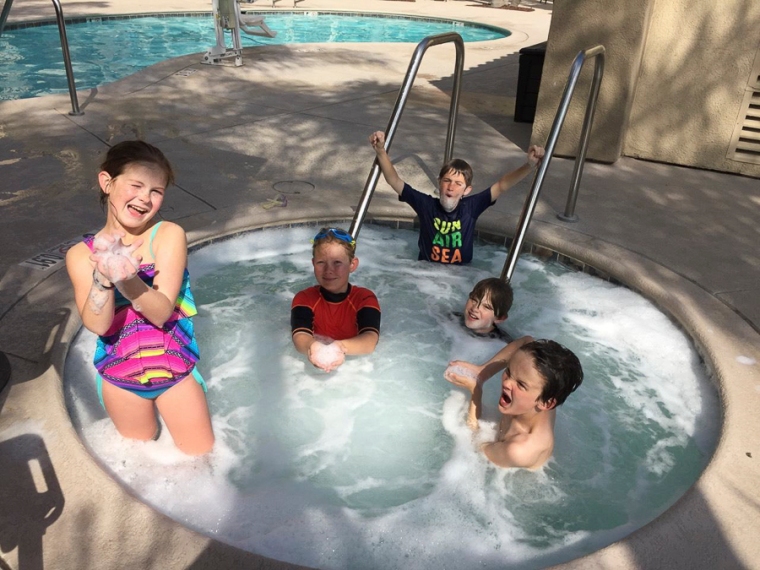 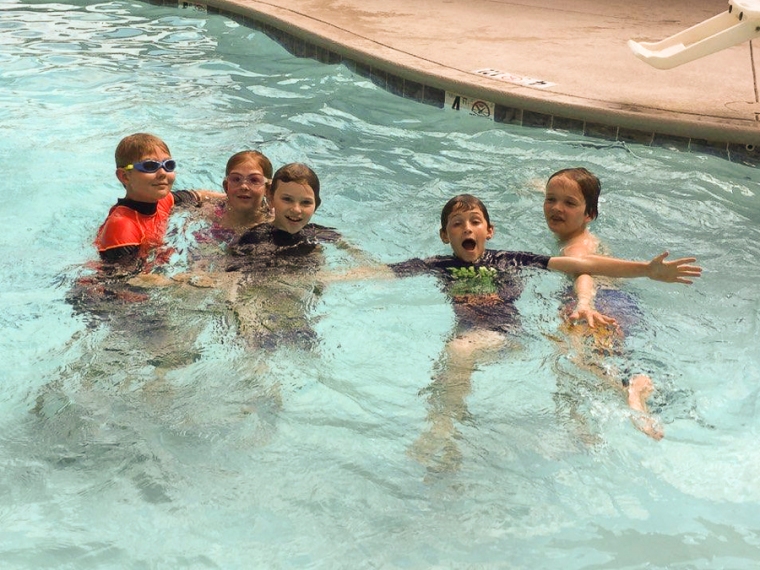 These kids had so much fun playing games and hanging out in each others rooms. 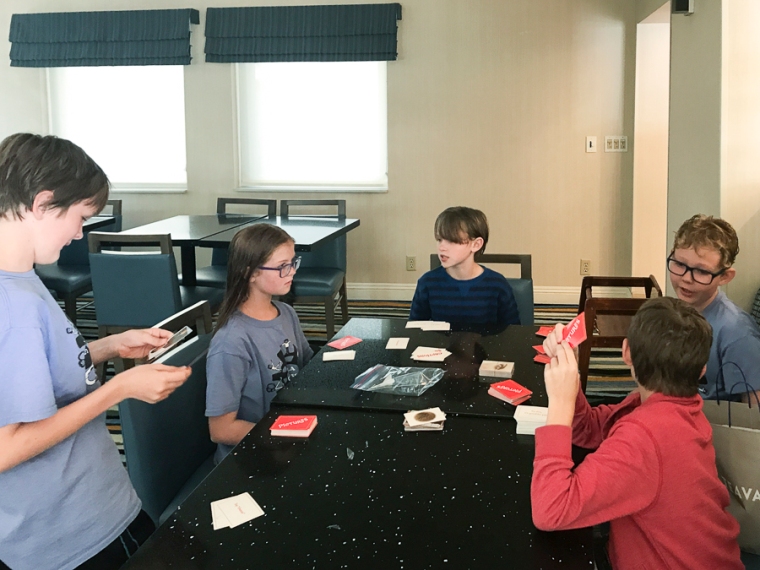 We were up bright and early Saturday morning for a 6 am departure. 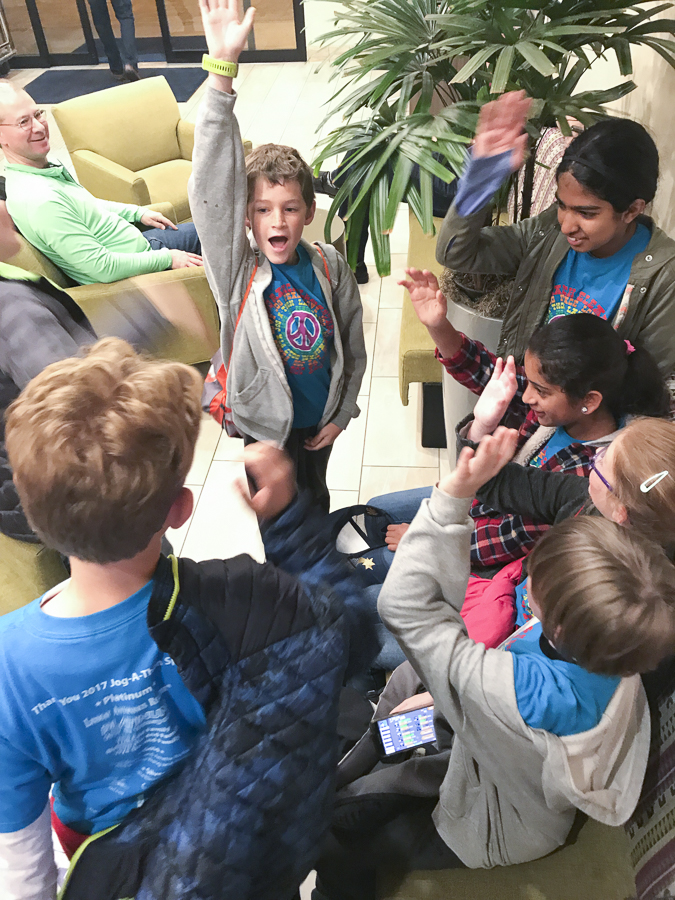 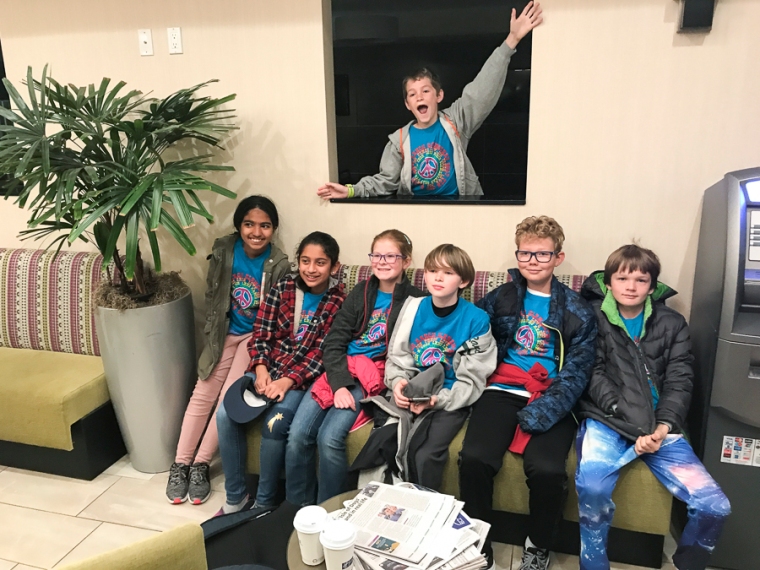 Their Long Term Performance was at 8:10 am.  Here they are getting ready to go on.  The judges get the front row seats. 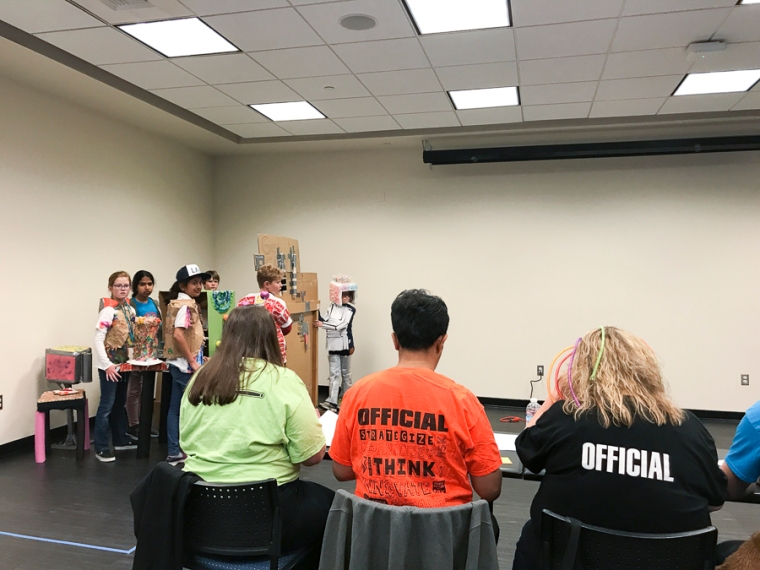 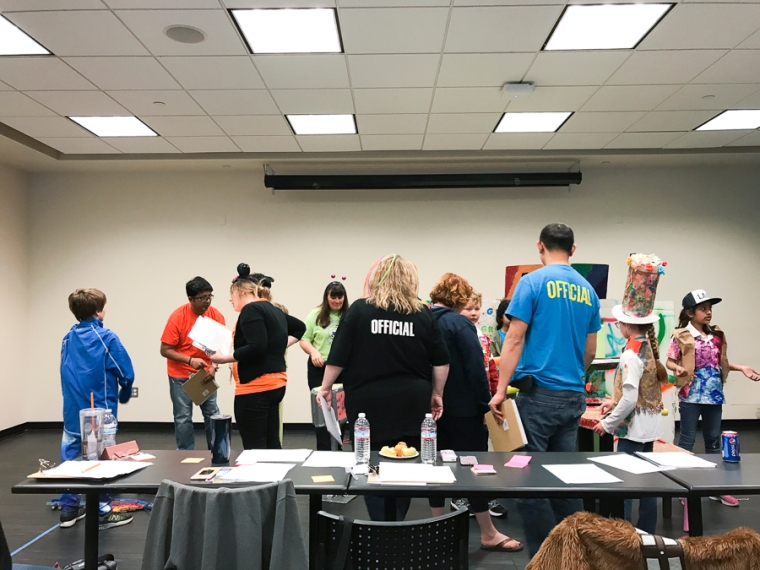 Here they are getting ready to see the 7th grade team perform. 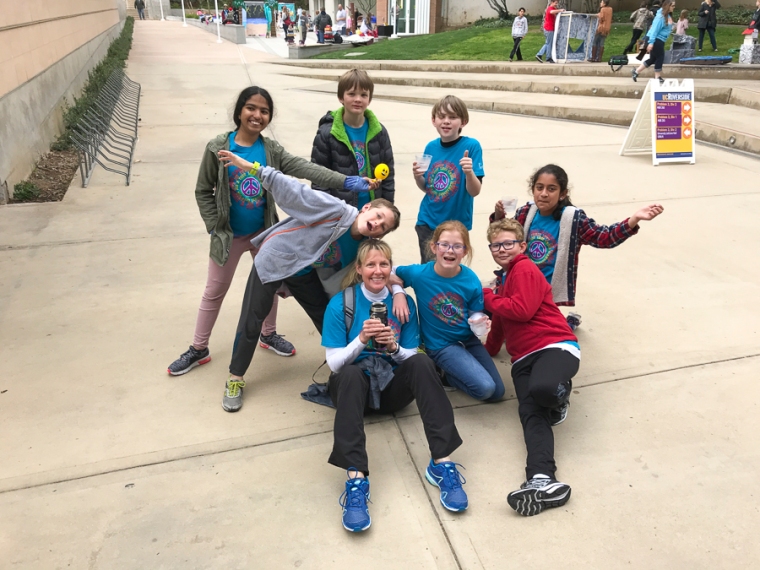 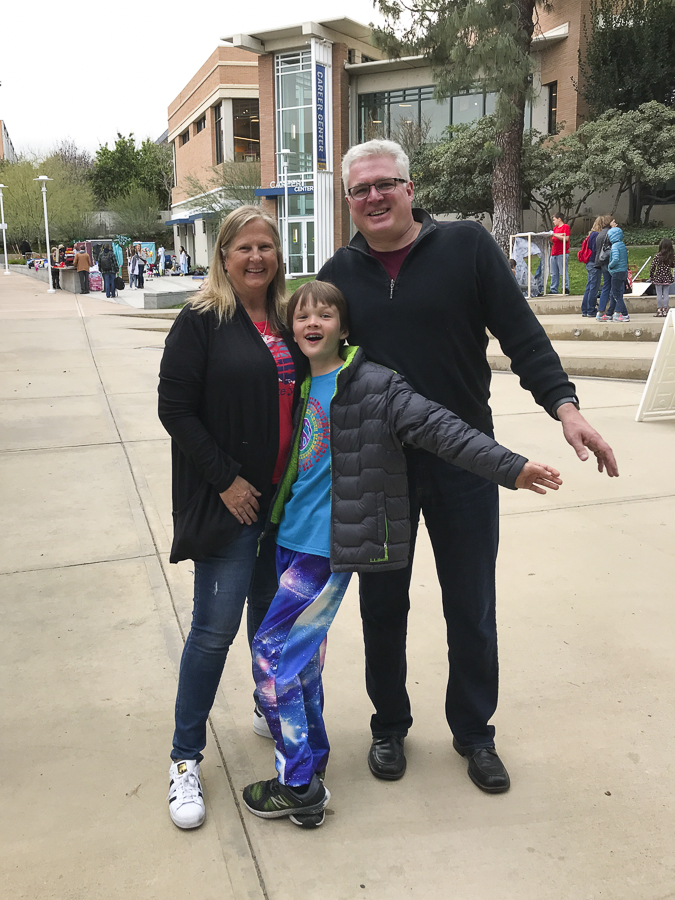 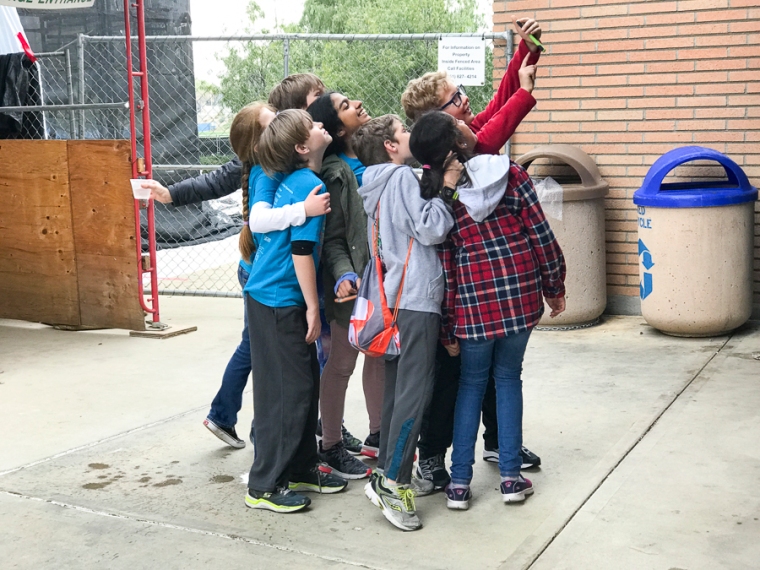 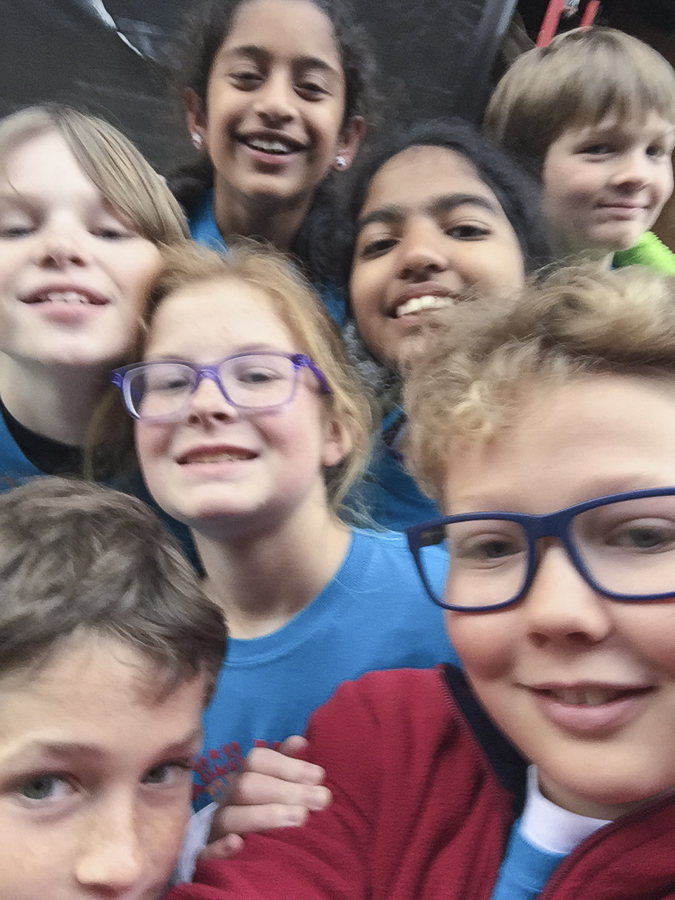 Time to review comments and scores.  And they were really good. 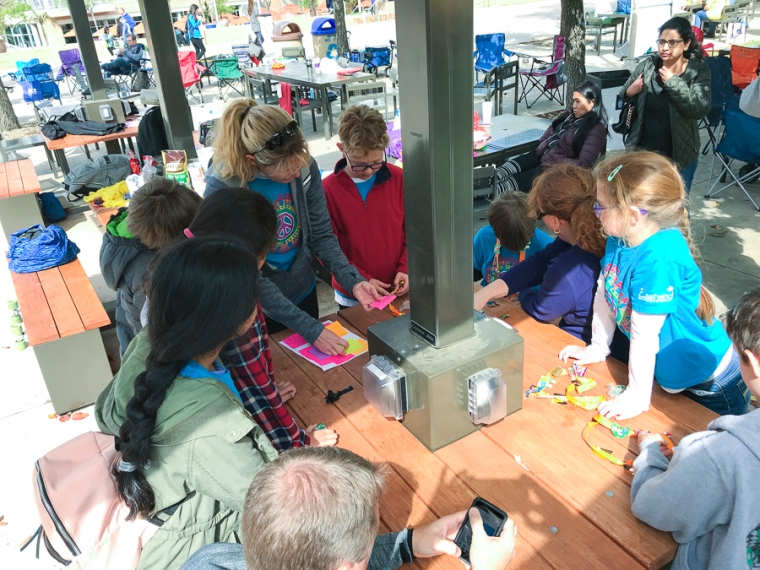 The tournament was held at University of California Riverside.  Perfect picture spot.    There were about 100 teams competing so about 700 kids plus families. 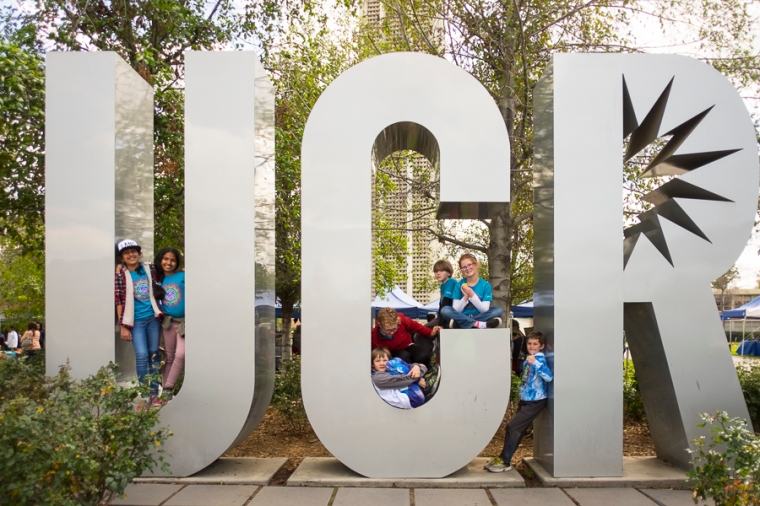 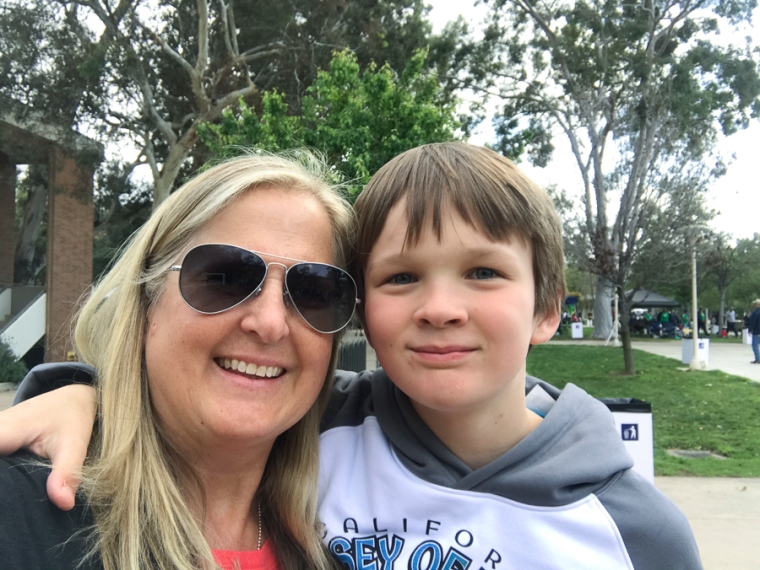 We had to get some Odyssey of the Mind merchandise. 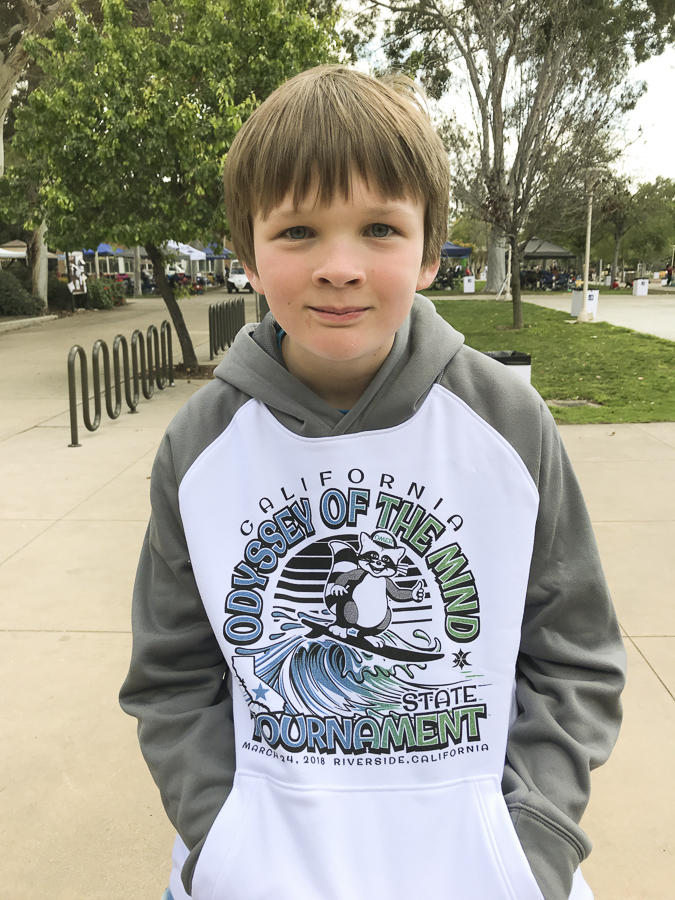 There was alot of down time between the long term performance and their sponts.  Glad we brought a book. 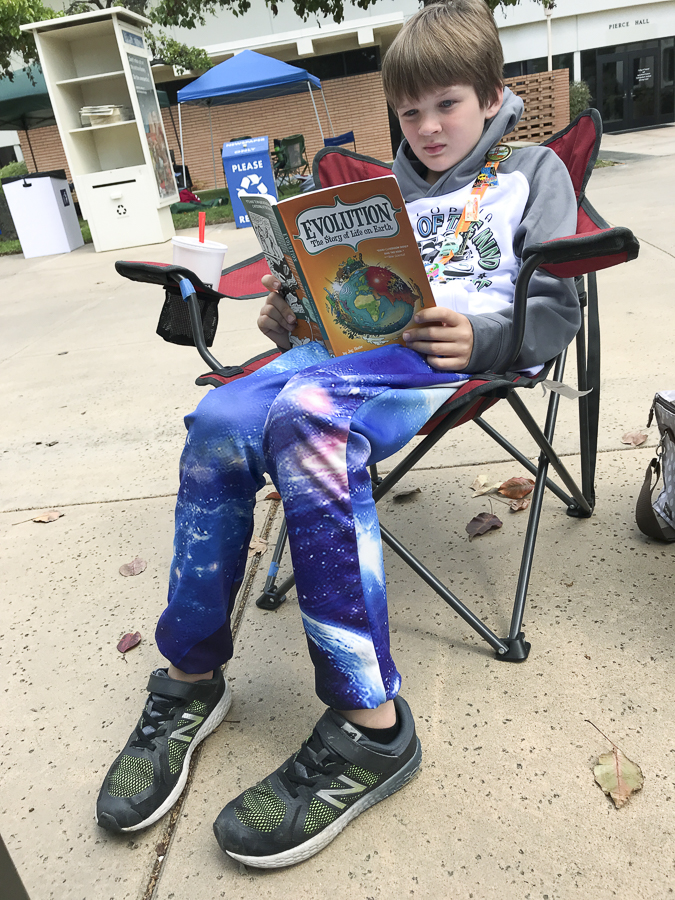 One of the fun parts of the day was pin trading with other teams.  The kids got a lanyard and 10 pins for their region.  Then they had to trade with kids in other regions until they got all the pins that spelled California! 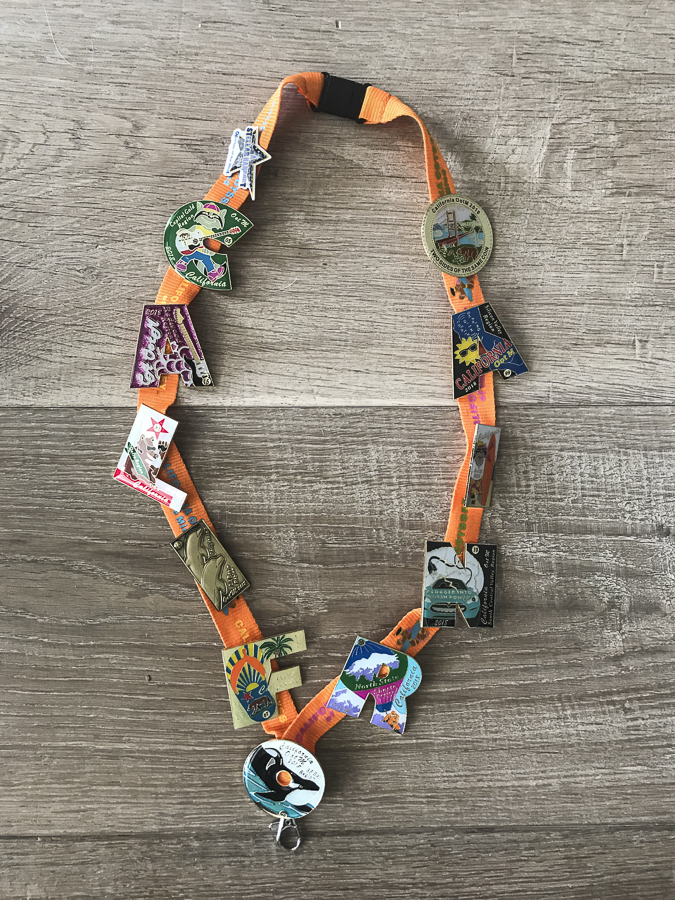 On their way to Sponts — which is a spontaneous problem that they have 3 minutes to solve as a team.   The Sponts make up 40% of their overall score.  Do you think they have a fun coach?  All the way there she played follow the leader to shake out all the nervous feelings. 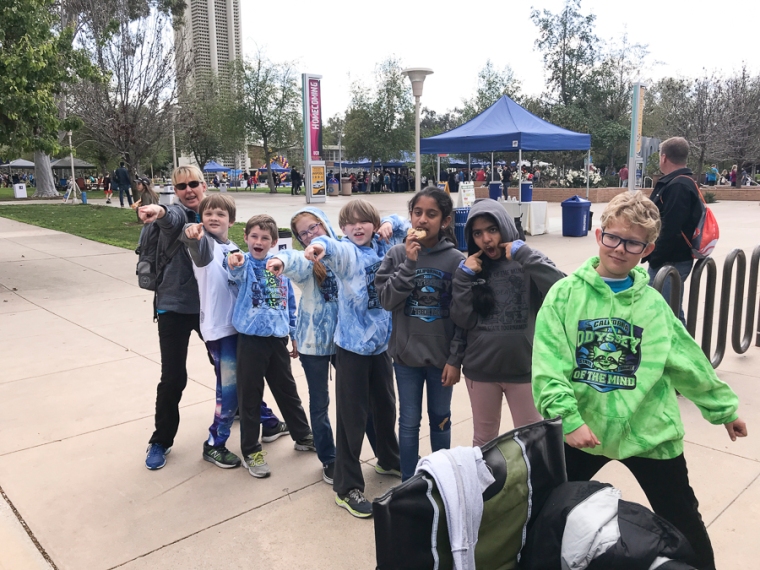 When they get out of Sponts the parents and the 7th grade girls team make a cheering tunnel for them. 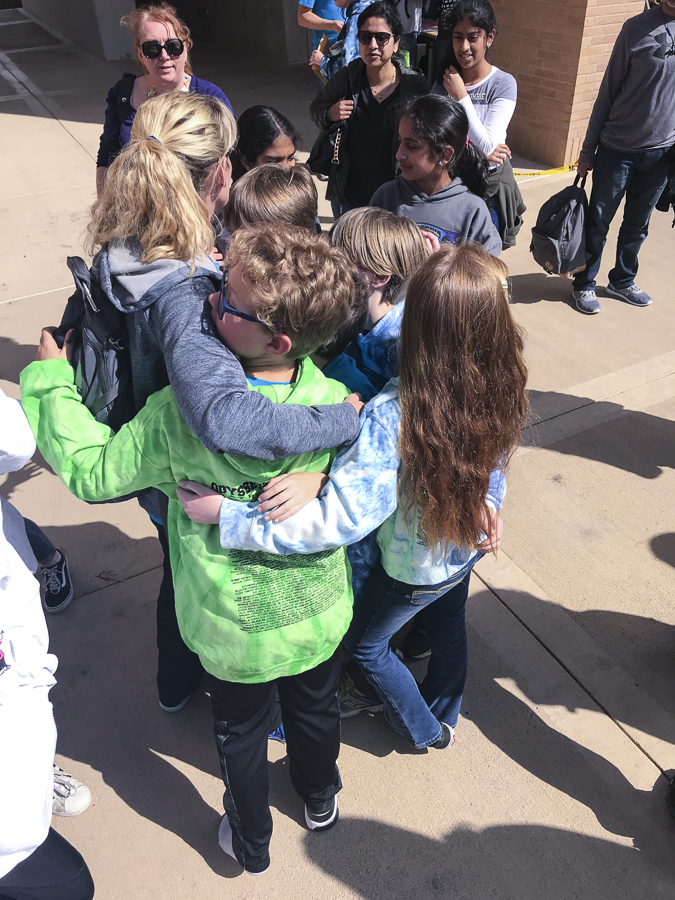 Coach Juli playing more games with the kids waiting for the awards ceremony. 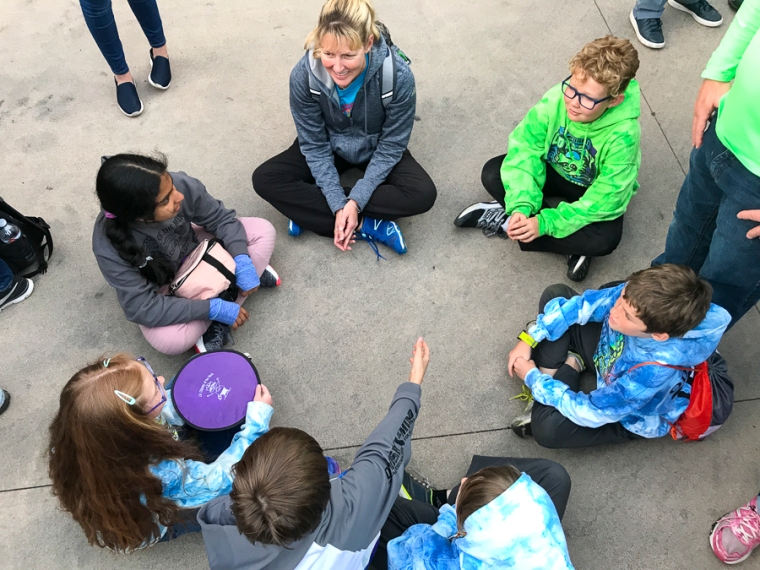 The top 2 teams in each division go to the World Tournament and Quinn\’s team placed 3rd.  They missed 2nd place by less than 1 point!  They earned the best score for their Long Term performance but placed lower for Sponts.  SO SO PROUD of these kids for placing 3rd in the state. 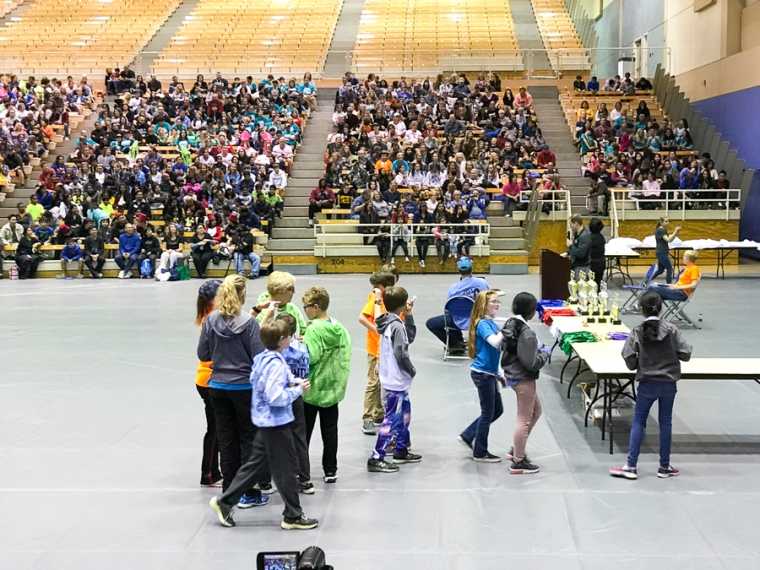 Many months of hard work to get here and so well deserved.  This group is pretty amazing. 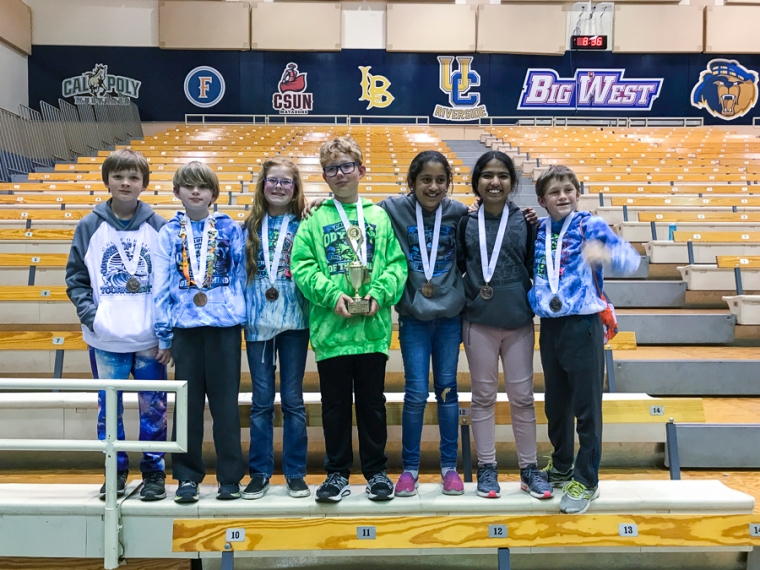