Yesterday Sonic was standing in the backyard barking down the side of the house, which is unusual for him.  I took a peek and thought I heard water being sprayed, ignored it, and went back in the house.

A little bit later I was taking the recycling out to our bin on the side of our house and as I was walking I heard this really loud wind-up-toy kind of noise but kept walking.  A split second later my brain told me to drop the recycling and get out of there.

I went inside the house and looked out the guest bedroom window.  He was coiled up and still rattling at me.    The \”rattle\” is much different from what I would have expected but was very loud and very clear.  It\’s unnerving to know that I probably walked within 1 – 2 feet of this guy.

I called Animal Control and they said they would be here within an hour and to keep an eye on the snake.  There was no way I was letting this guy out of my sight.    And he started moving. 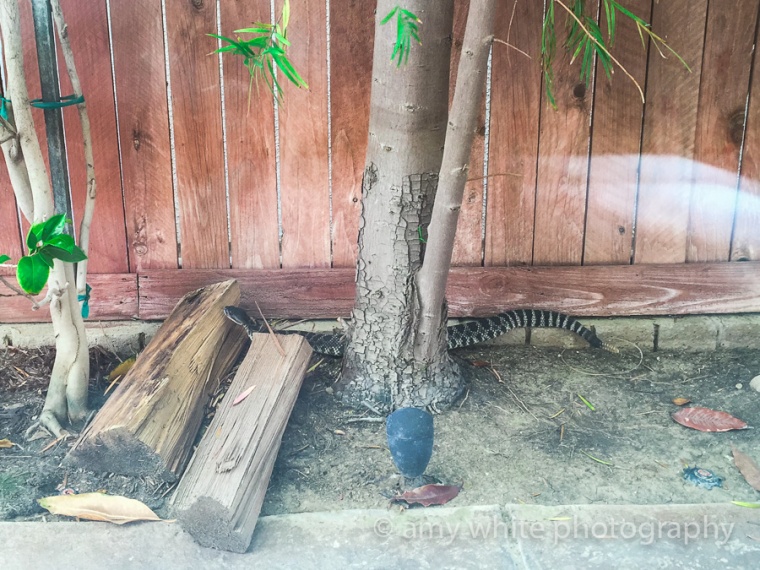 He worked his way up the path and was sitting in a sunny spot when Animal Control arrived.

Animal Control was in and out of here in less than 5 minutes.  I shot this video so I could record the sound to play for Don and Quinn.  Not much to see but if you turn the volume up that static-y sound is the snake.

Our boy Sonic could sense the danger of the snake and did not approach it at all.  Even after the snake was taken away Sonic was pretty spooked by the smell of it on the side of the house.

And now we know.  I didn\’t think we were immune but never expected to see one in our own yard.  Sonic is scheduled to go to Rattlesnake Avoidance Training and I\’m never going outside again 🙂  And I hope you will still come visit!!