Quinn didn\’t want much for Christmas so instead of unnecessary gifts, we decided to take him to the snow.  For the last couple of years he has been asking to go to the snow.  And then over Thanksgiving he and Don left Chicago the day Chicago received lots of snow and Quinn was so disappointed.

Mammoth was pretty much guaranteed snow in December and is about a 5 hour drive so that was our choice.

Don was looking dapper in his scarf. 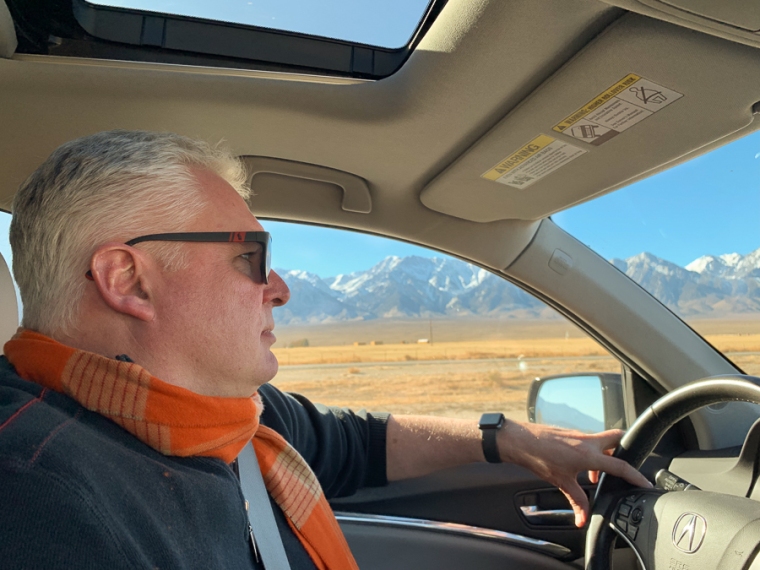 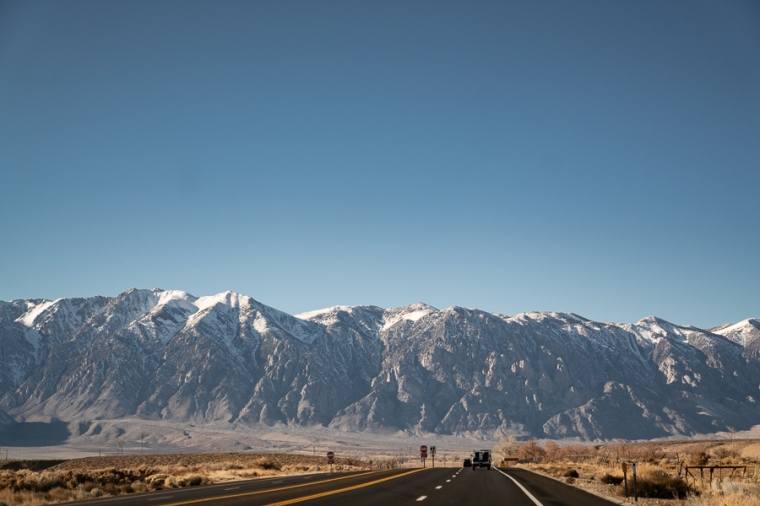 We stayed in a condo at The Westin which was a great location.  We were accross the street from Mammoth Village with lots of shops and restaurants. 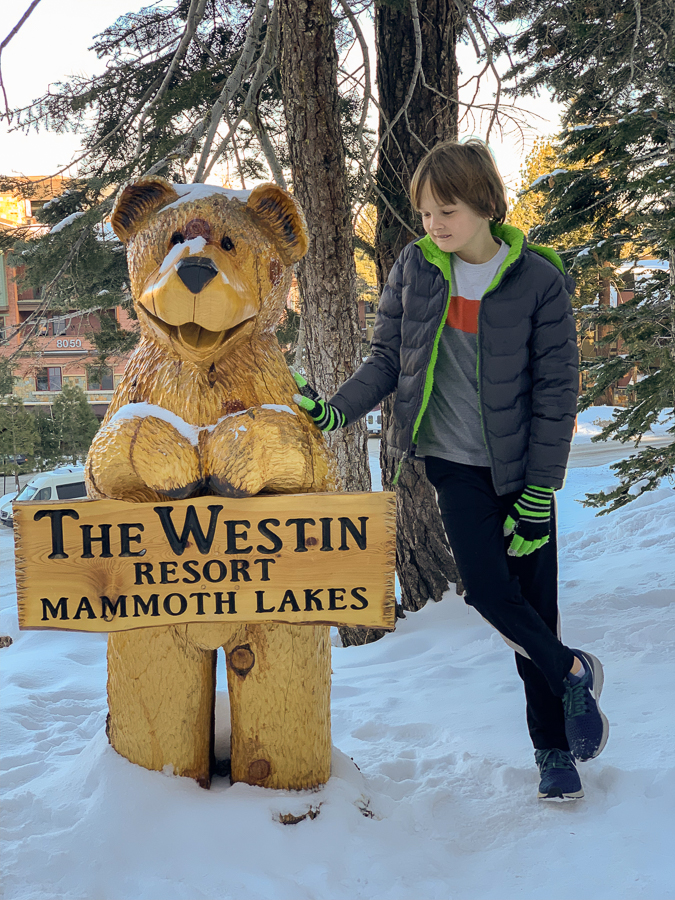 The gondola was also right across the street so we decided to check out the mountain. 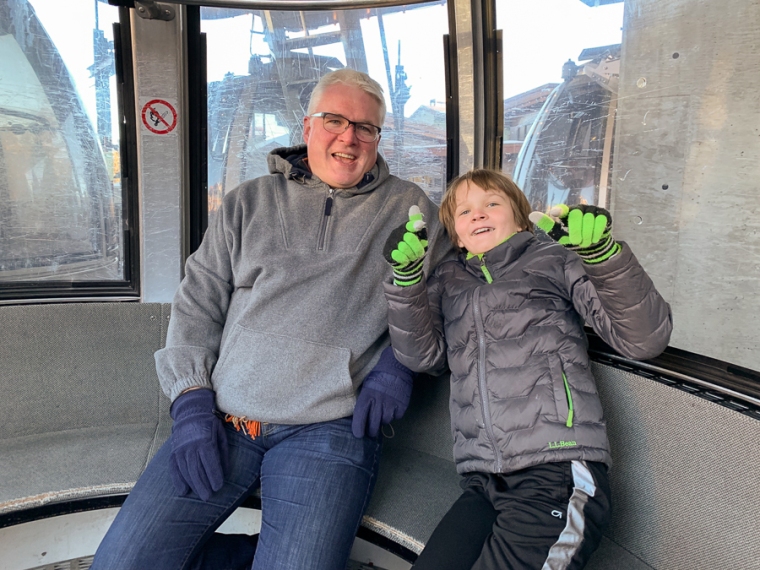 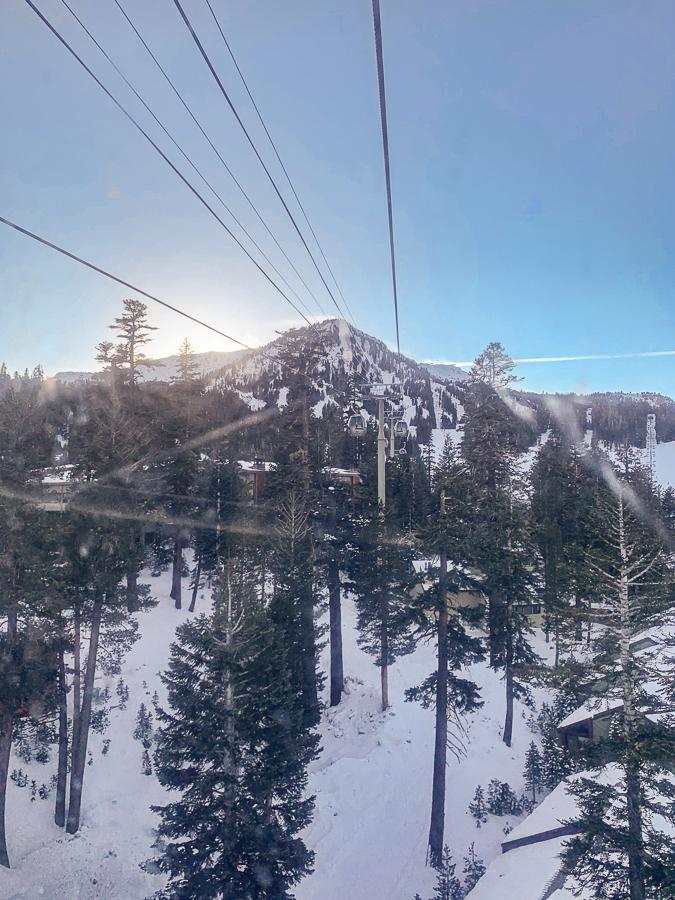 The next day we hit the slopes.  We had arranged for Quinn to take a ski lesson and Don decided to ski too.    I played photographer. 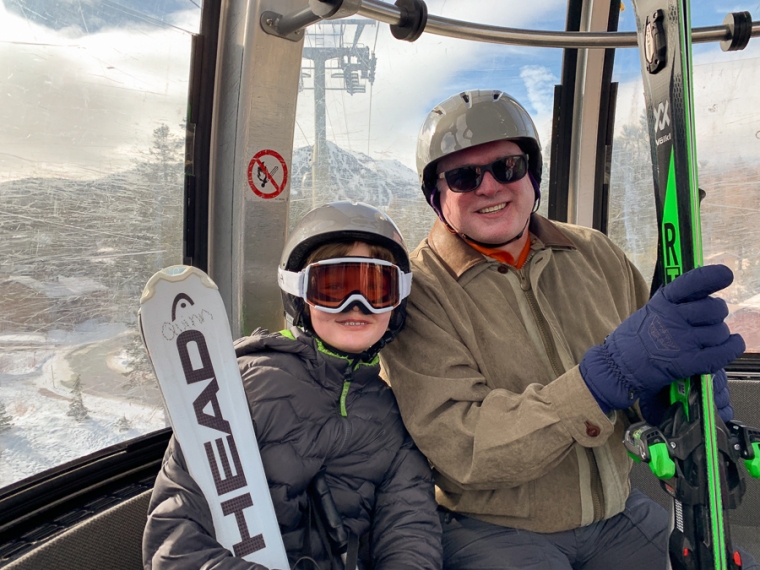 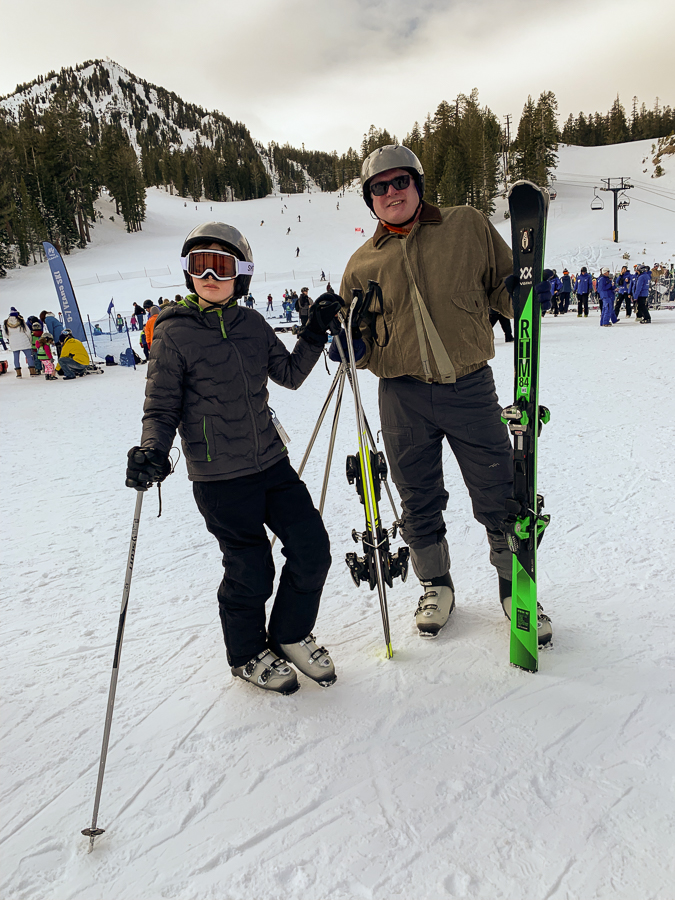 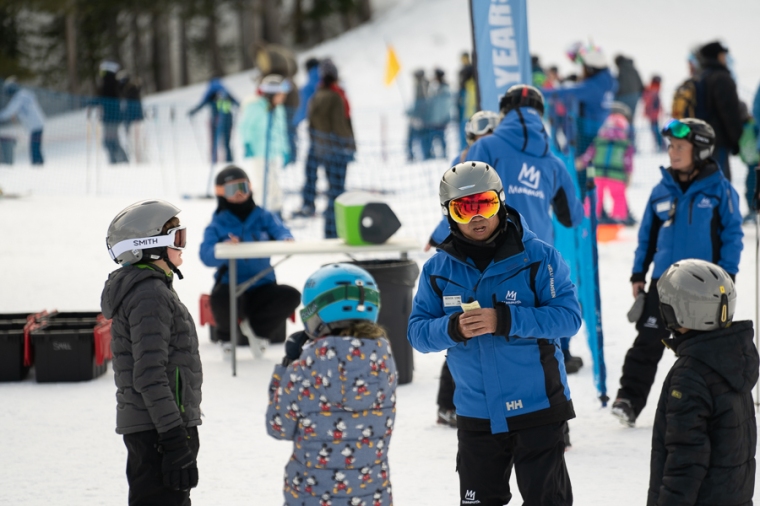 This was about the extent of the lesson.   Not even a bunny hill and no tow ropes. 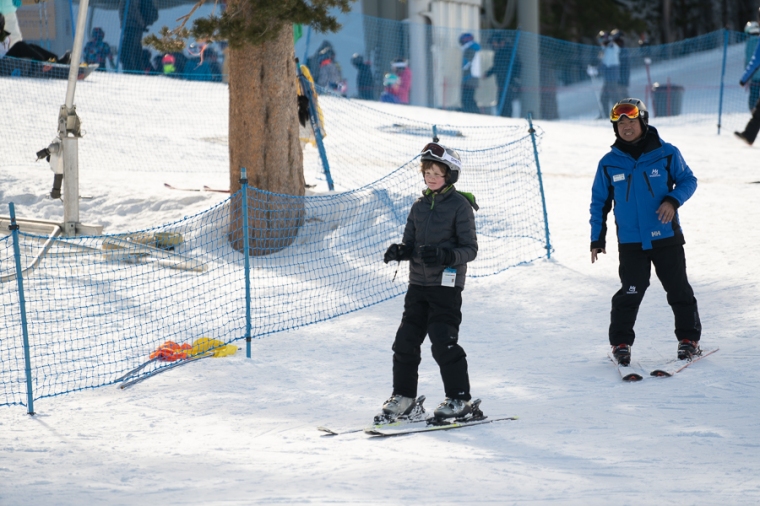 A view of the slopes from the top deck. 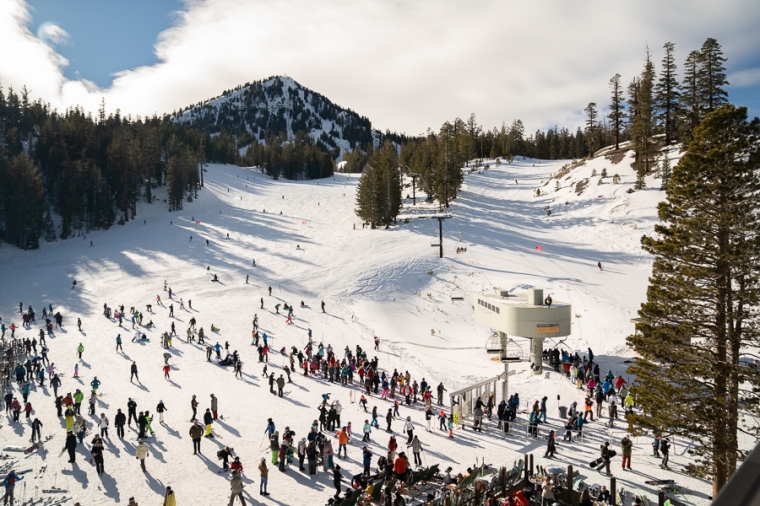 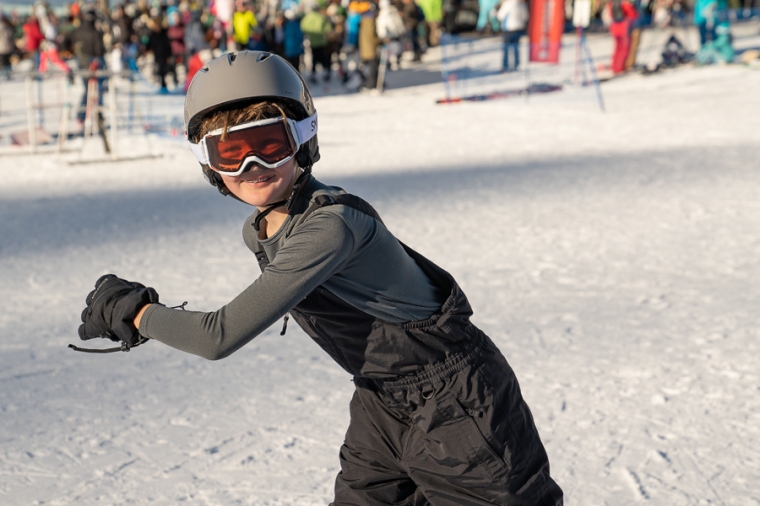 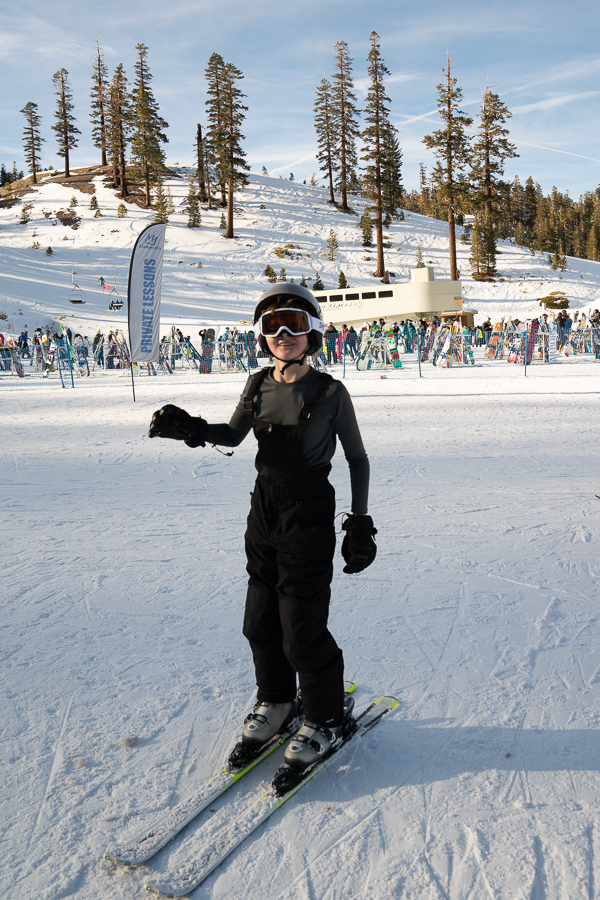 Here are a couple of pictures from Don near the top of the summit.  Pretty sweet. 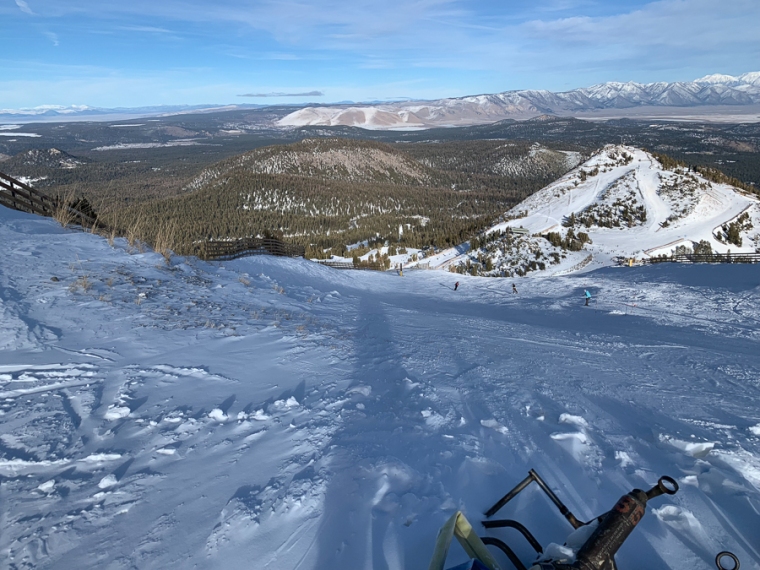 After skiing we walked to the village for dinner.  We wondered what was going on with all these colored headphones. 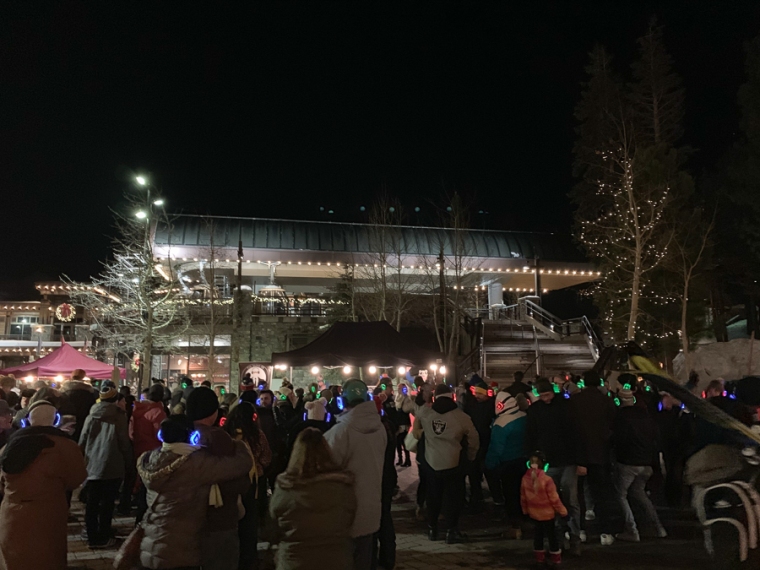 It\’s called Silent DJ and it was a blast.  The headphones were free and you could tune in to one of three DJ\’s.  You heard the music through the headphones so the onily noise you hear without headphones was people singing.  It was so much fun!   We danced our butts off. 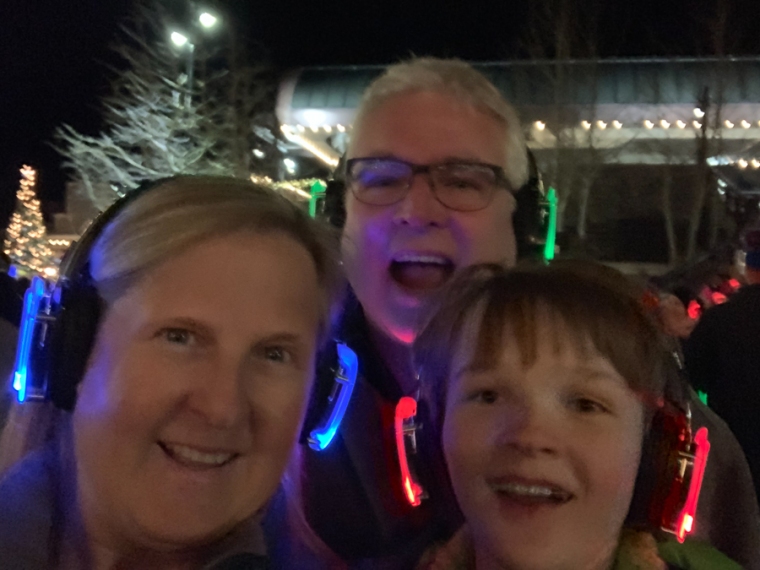 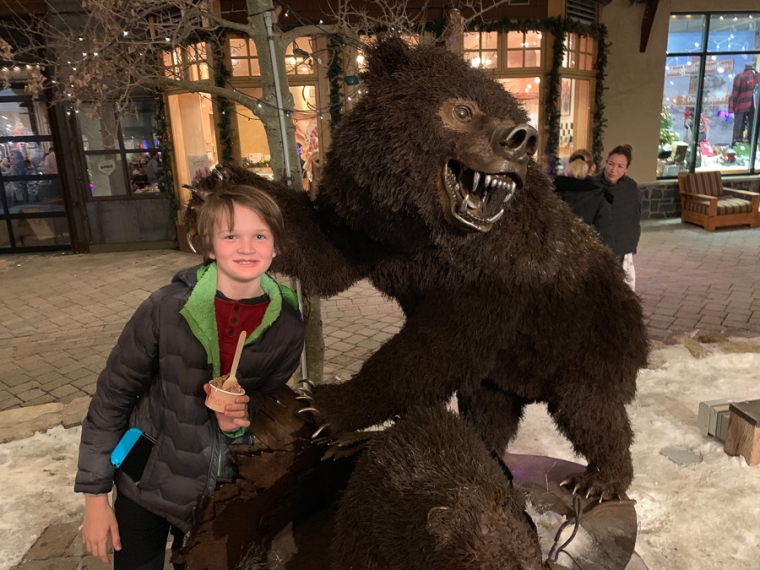 The next day we went tubing at Woolly\’s Tube Park. 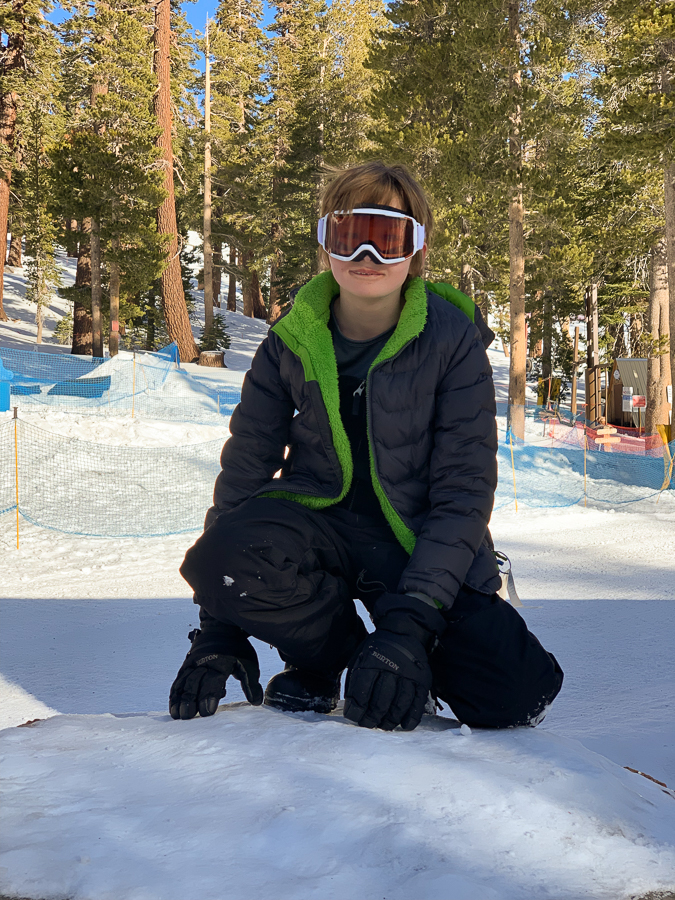 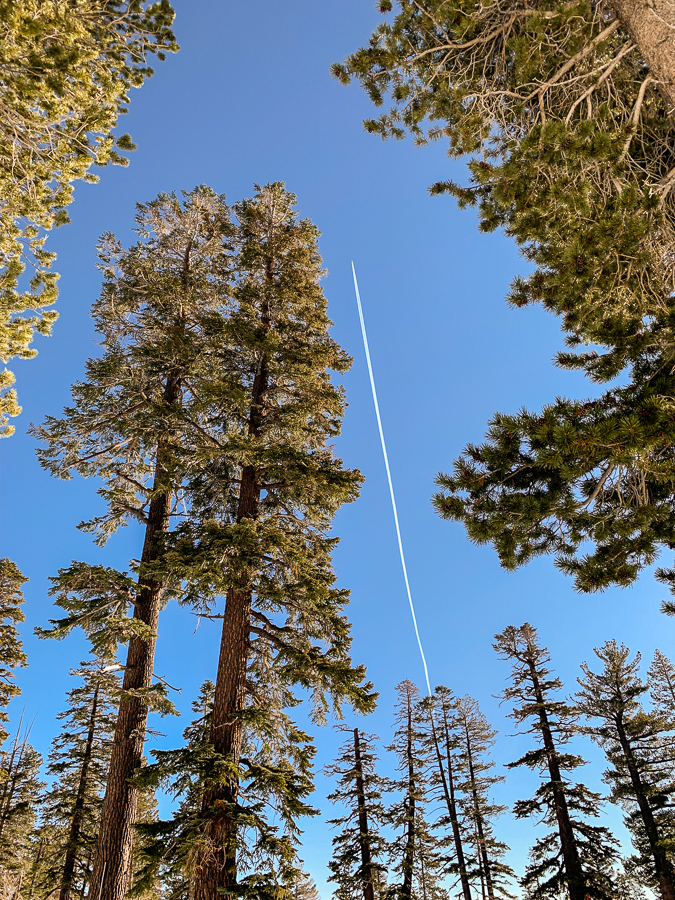 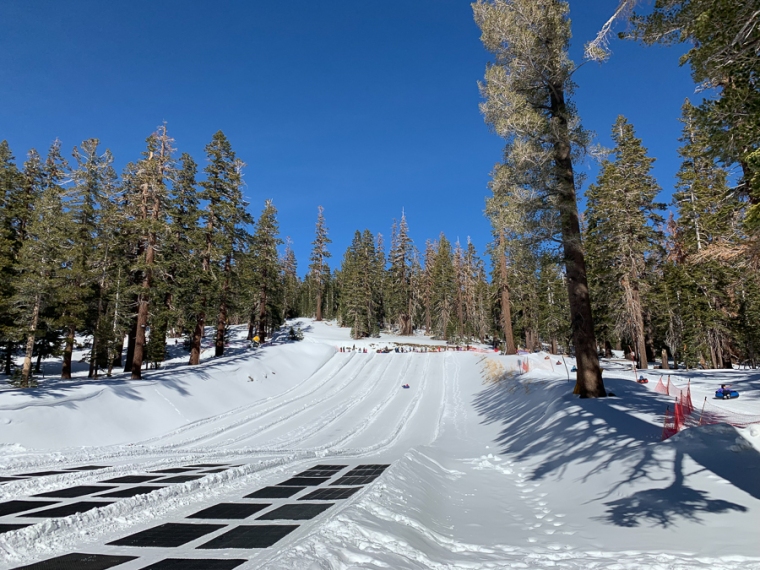 You were pulled up a tow rope and Don captured it on the GoPro.

Here\’s Don and Quinn going down the run.  It was so much fun!

Mammoth has a great FREE bus system that we used to get to Woolly\’s and back.  A pretty beautiful bus stop! 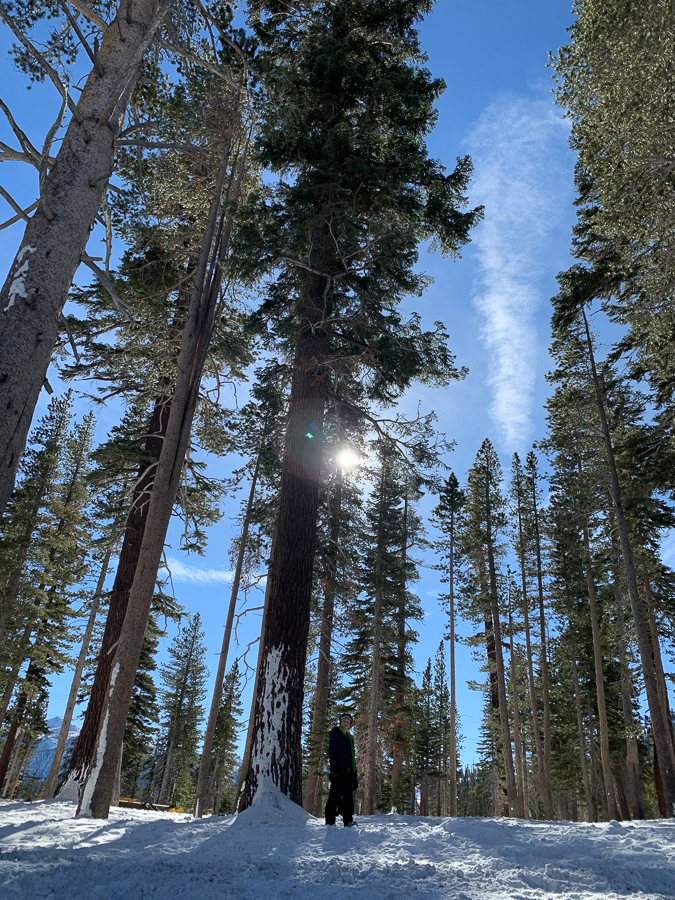 And more silent DJ and some scenes from the village. 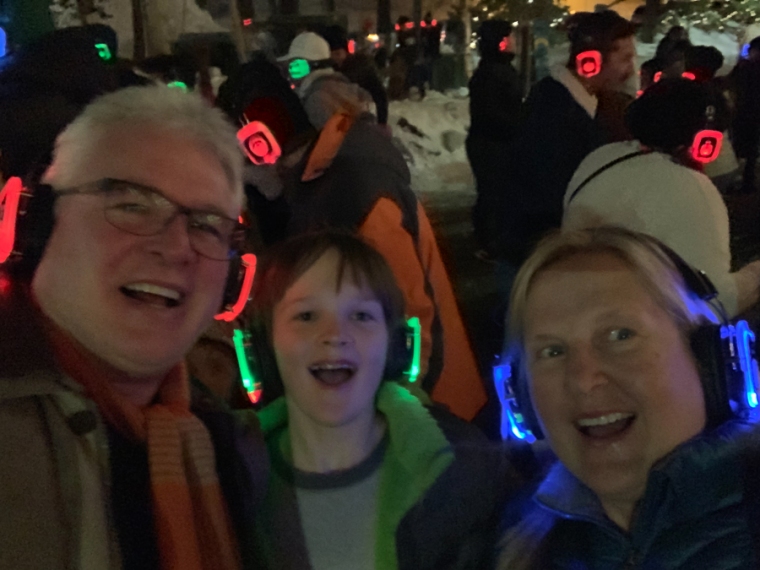 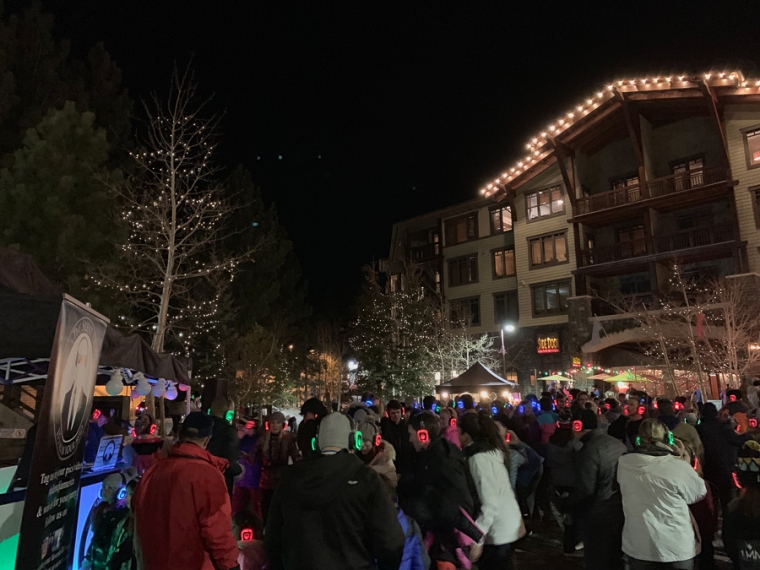 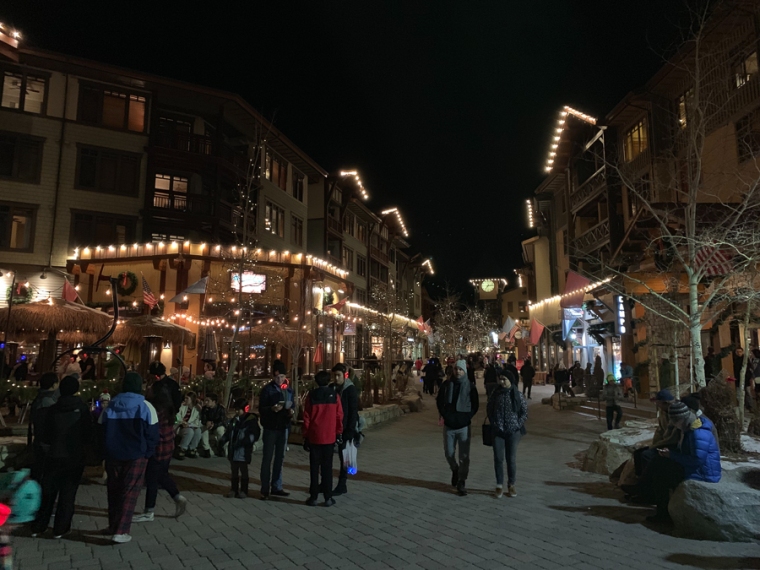 Quinn loved skiing so much that Don decided to take him back to the slopes and play ski instructor.  I was skeptical and had my mom worry going but I knew Quinn was in good hands.

Quinn at the top of the hill. 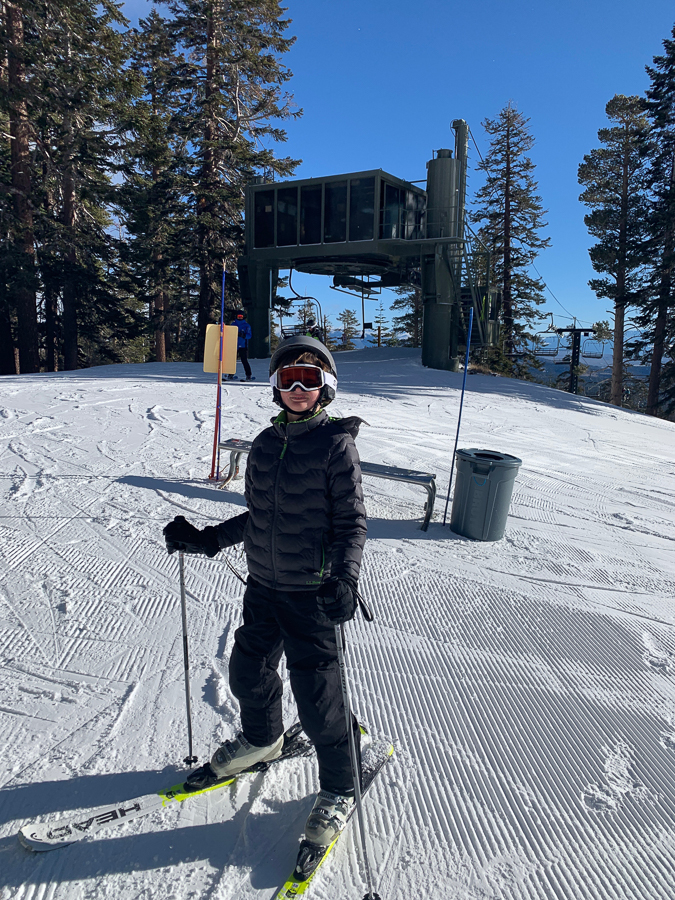 And a review of his first run. 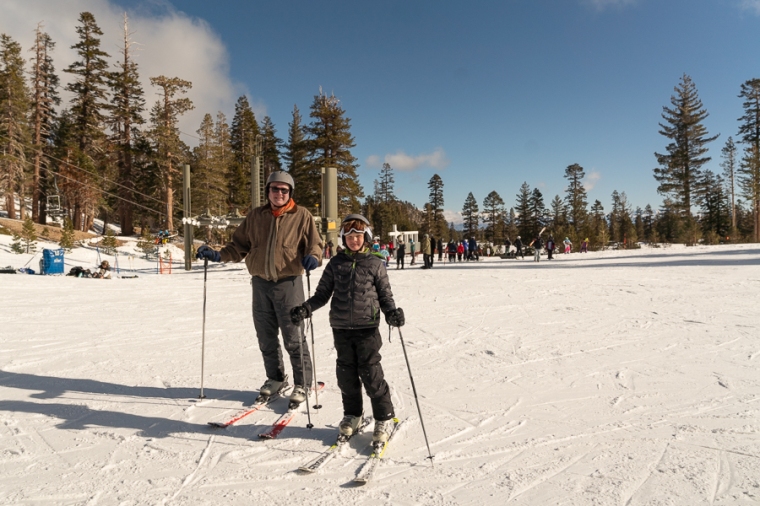 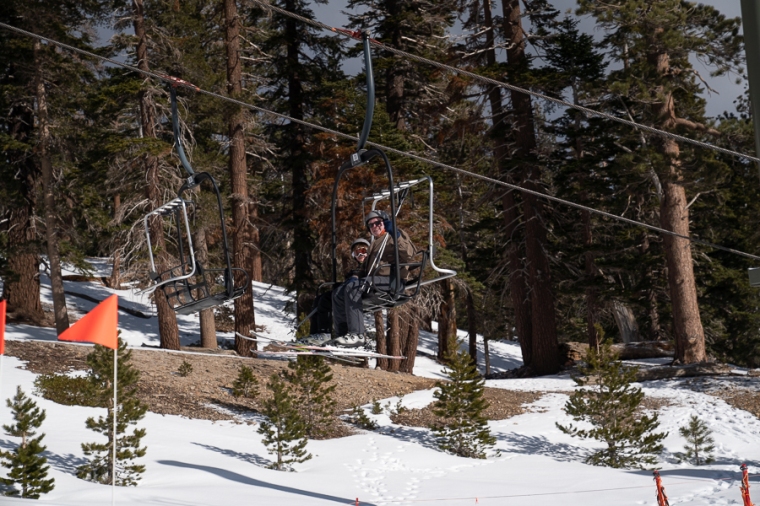 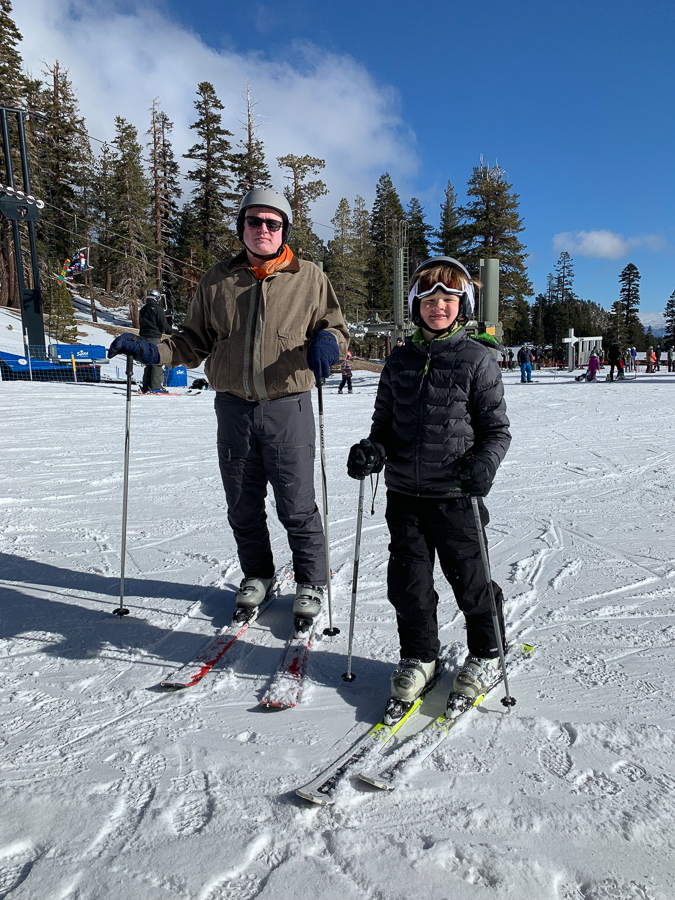 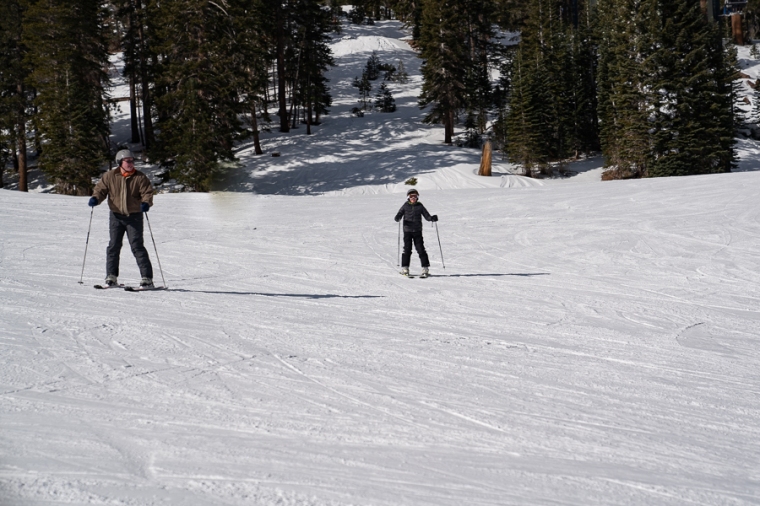 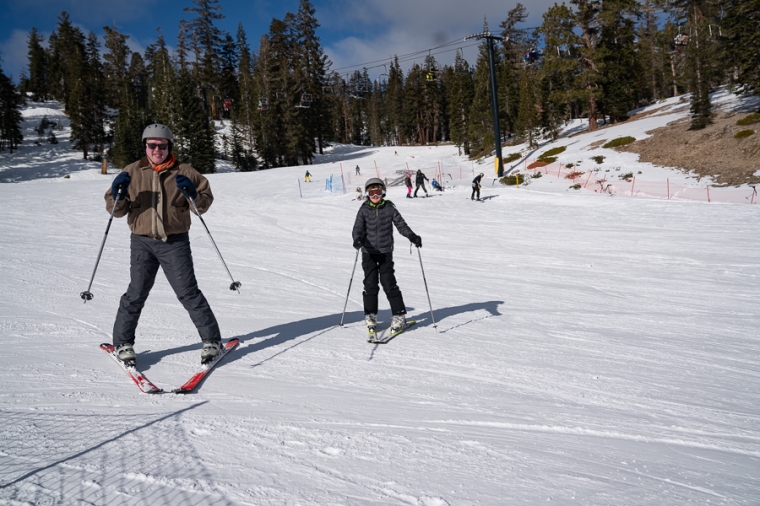 Quinn and Don Skiing from amy white on Vimeo.

We tried to take another gondola to the top of the summit at 11,000 ft but the winds were too strong and it was closed.  We waited for the bus home and it was so cold we froze our butts off.  We had planned to go to the village for NYE but we were still thawing out.

Instead we had dinner in the hotel restaurant and watched the fireworks from the window.  Win-Win!

The morning of our departure.  The view out our condo window.  We didn\’t bring our bathing suits. 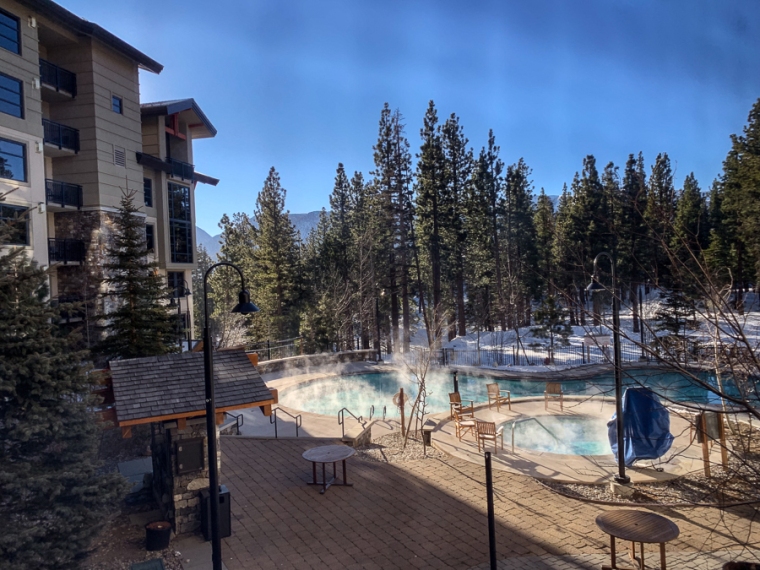 It might have been a little cold at 10 am.

Overall a great trip!  We decided we are not cold weather people but Quinn knows that he wants to ski again so we are shooting to get him skiing again this winter!