I decided to put some art up on the empty wall in our kitchen across from the kitchen table.  I played around with a bunch of ideas before my good friend Joanne Taylor recommended a great idea of putting up shelves.  This way we could interchange our \’art\’ and make it a seasonal display.  Our inspiration for this wall was Seattle and you can see that it is not so subtle. 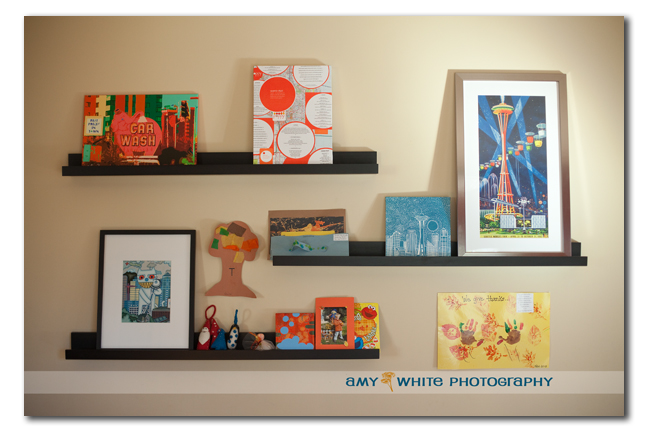 Don put up the shelves before Quinn started school and I didn\’t realize how much art work that Quinn would be contributing to our collection.  It\’s great because he\’s always making seasonal art at school.  You can see some of his handiwork below.

It\’s funny because Quinn used to be the boy that ran away when I pulled out my camera.  Now he just needs to get in the picture.  He will put himself in front of the camera and say \’cheese\’.  Not much cheese here 😉

One of Don and my favorite restaurants in Seattle was a place called Poppy.  They serve Indian inspired Thali which is a bunch of little dishes of yummy food.  It was great because the food was spectacular and we felt comfortable taking Quinn with us.  For our Seattle inspired wall, I got this crazy idea of including menus of our favorite Seattle restaurants.  Poppy happened to be the only one that came to the rescue and sent us a bunch of menus, business cards, and fun stuff.    I took their menus, a Seattle road map, a blank stretched canvas, mod podge and made this… 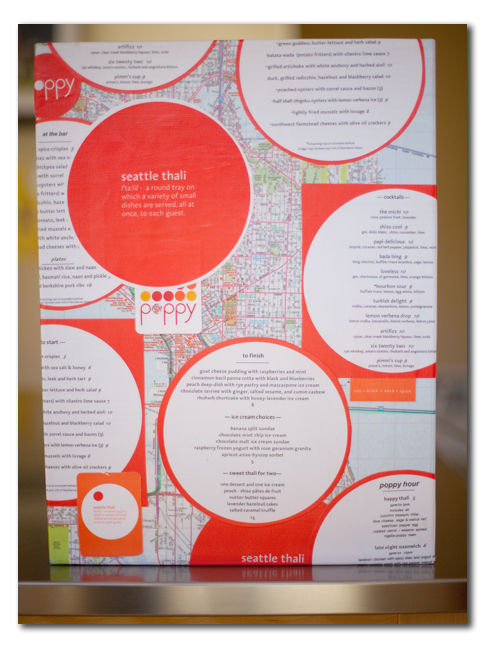 I think it turned out pretty good and adds an interesting touch to our wall of art.
I can\’t let you go without one very cute picture our happy little guy.

This afternoon Quinn and I joined some other Moms and Boys for a train ride.  We caught the train in Westfield at 1:27 pm and rode for about 6 stops or 25 minutes. 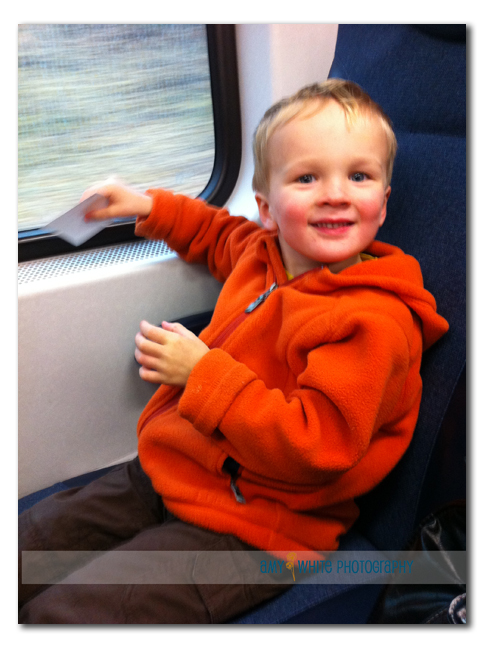 A couple of the boys brought back packs full of stuff to keep them occupied on the train.  Here they are huddled together for a snack and some boy fun. 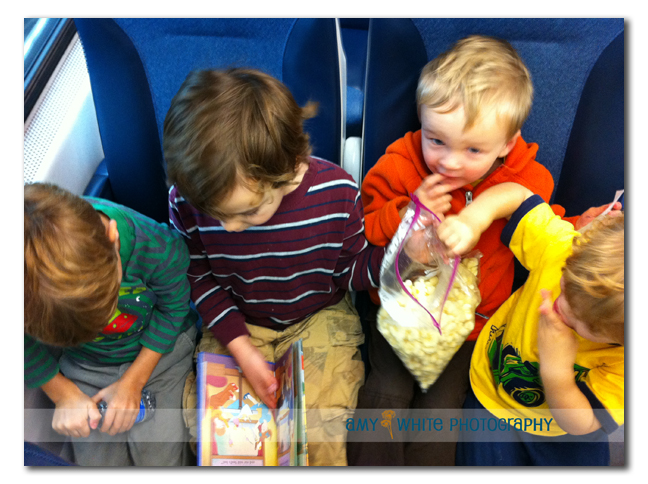 We need to do this more often!

The weather was gorgeous this weekend so we decided to go out on an adventure.  We have a season pass to the Bronx Zoo which also allows us free admittance to the NY Aquarium on Coney Island.    We didn\’t know much about Coney Island but it was only a 25 mile drive so definitely worth checking out.

We started at the NY Aquarium which is right off the boardwalk.  A bunch of the exhibits are outside and then you can go under the sea cliffs and check out the sea creatures from below.  We saw a ginormous sting ray, sharks, turtles, sea otters, and penguins.   We got a fly-by from this little fellow. 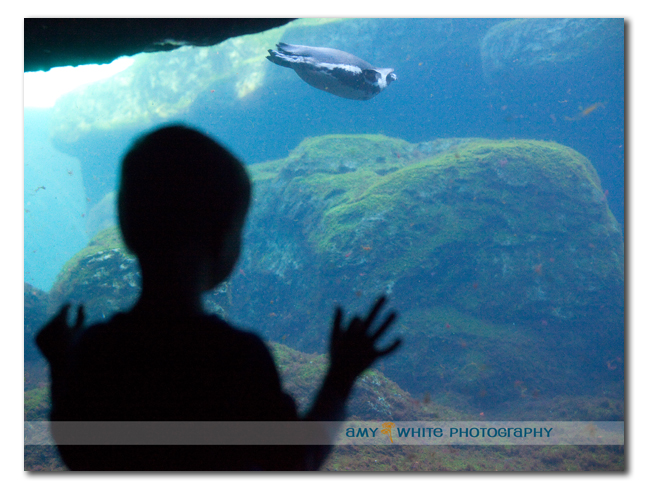 There were more exhibits inside with a special area for jelly fish.  Here\’s a picture of my guys through the jelly fish tank.

After the aquarium, we headed out to the boardwalk to see the sites…and did we ever.  Don described Coney Island as \”Venice Beach meets The Soprano\’s\”.  The people watching was fantastic.   In the upper left hand corner of the collage you see the \”Shoot the Freak\”.  It\’s a paint ball shooting galley with live human targets.  We were disappointed that it was closed.

Funny enough as we were walking by Shoot the Freak, there seemed to be a photo shoot in progress — a different version of \’Shoot the Freak\’.   You can tell it\’s a pro, because there is a women holding a reflector on the right.

When you looked the other way it was a beautiful beach scene. 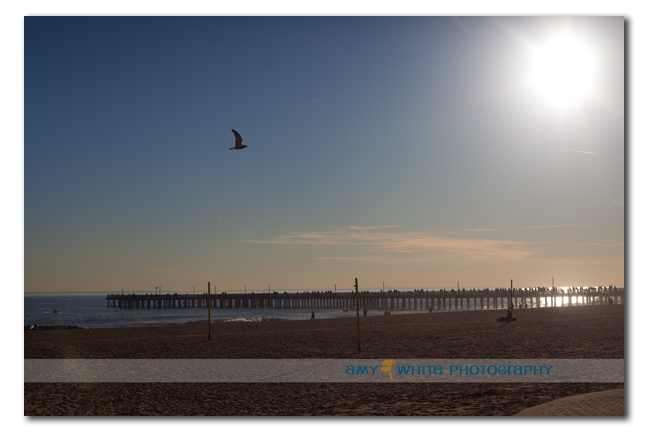 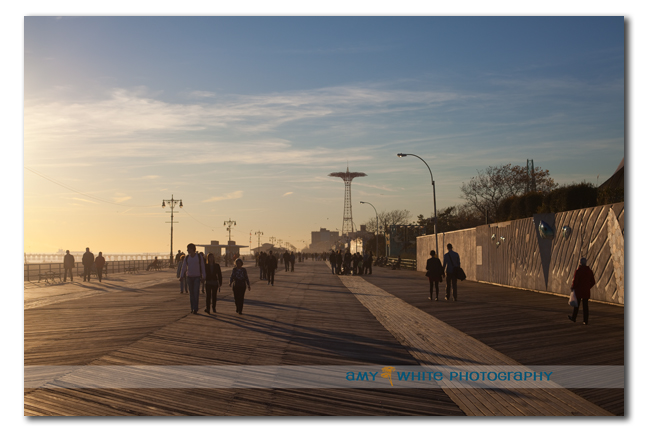 The boardwalk runs a couple of miles from Coney Island down to Brighton Beach.  It\’s like walking from NJ to Russia in one short mile.  Brighton Beach is also known as \”Little Odessa\” as many of the residents originate from Odessa in the Ukraine.  As we walked down the boardwalk, the language gradually turned from english to russian.  We checked out a couple of restaurants and the menus were in both russian and english.  It was a fascinating place. 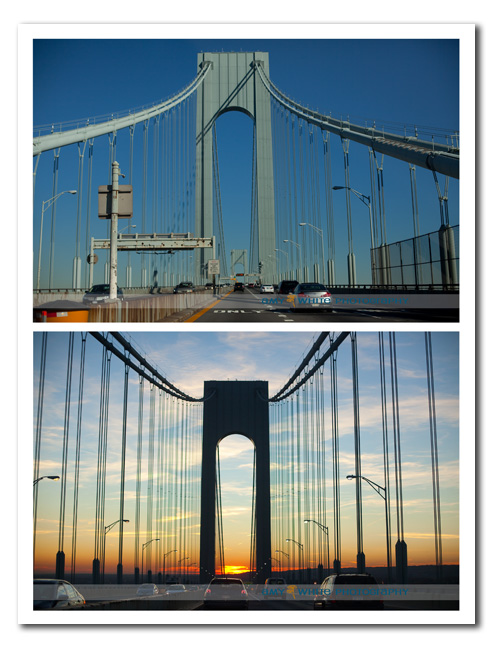 I pulled this arial picture off the internet.  You can see Coney Island and Brighton Beach in the top right hand corner.

We all traveled home to Maryland in September for a Cantelo Family Gathering.   It was most likely our last time together as a family at our home in Maryland as Ross and family are off to Singapore and mom will be selling the house in the Spring.   I have so many wonderful memories growing up in the house and added on quite a few more with this visit.  It was great to be together. 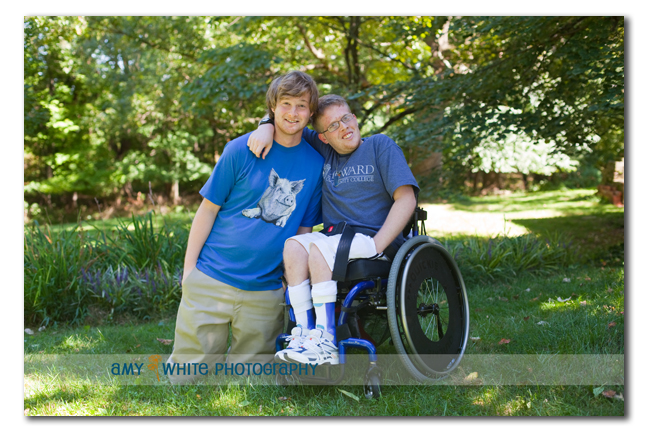 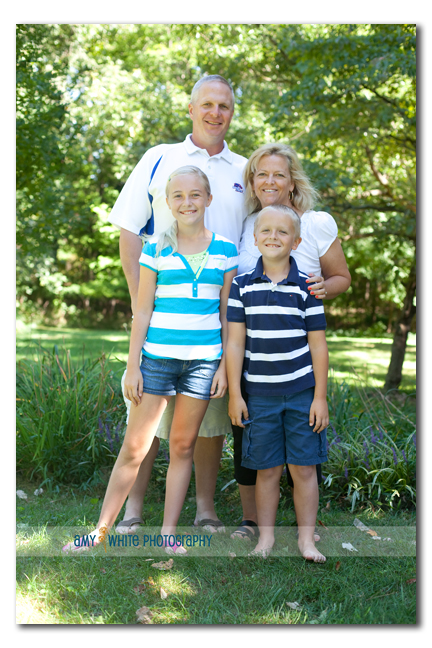 Quinn and I have had a terrific day.  It started out with both of us sleeping in until 9:30 am.  What a treat!  We enjoyed a nice lazy breakfast and then headed out for a Starubuck\’s.  Yes, it already sounds pretty good and we\’re not at the good part yet.  Quinn got a haircut and then we headed to one of our favorite local parks, Nomahagen.  The park is especially beautiful this time of year when the leaves are changing.  There are two playgrounds tucked in to the edge of the woods.   Quinn had a great time and didn\’t want to leave after almost 3 hours.
We also took a walk around the lake, over the bridges, petting puppies, and throwing stuff in the water.    The weather was absolutely beautiful today and we made the most of it!
Here are a couple of collages for our great afternoon! 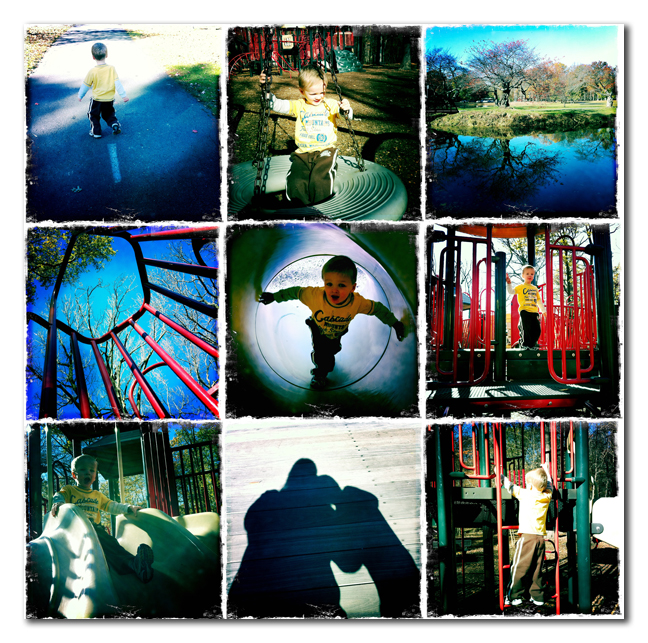 I feel so fortunate to have found the Holistic Moms Network in NJ.  Before moving from Seattle to NJ I looked for groups that were accepting of families that practiced attachment parenting, babywearing, extended breastfeeding, vegetarianism, and other not-so-mainstream ways of living and raising a child.   I searched my hippy-mom websites and found the Holistic Moms.  Was I really Holistic?  And was I holistic enough to join a holistic moms group?  I have to admit that it was a little bit out of desperation to make friends that I joined the Holistic Moms Network and funny enough almost 2 years later I am one of four co-leaders for the group.
The group has so many great events and recently we had a Holistic Halloween Party at a local park.  It couldn\’t have been more perfect.  The weather was beyond exception, the leaves on the trees were bright with color, and the ground was covered with leaves. 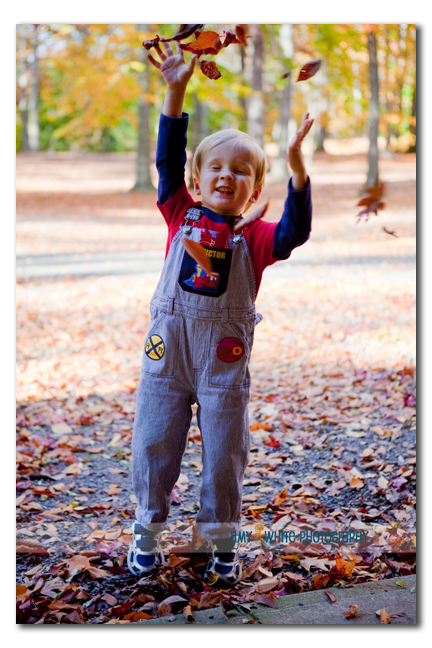 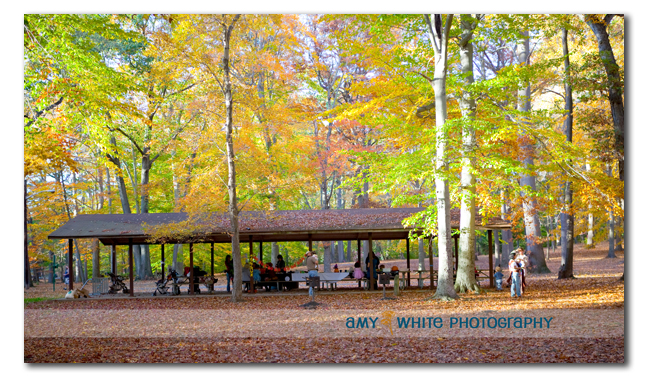 Story Time!  You probably recognize our boy from the back and also Fraser.  Quinn\’s little buddy, Teddy, is on the far left dressed as Little Red Riding Hood.  The base of the costume is a devil\’s outfit that his father wore as a boy.   Needless to say, he\’s a very imaginative little boy. 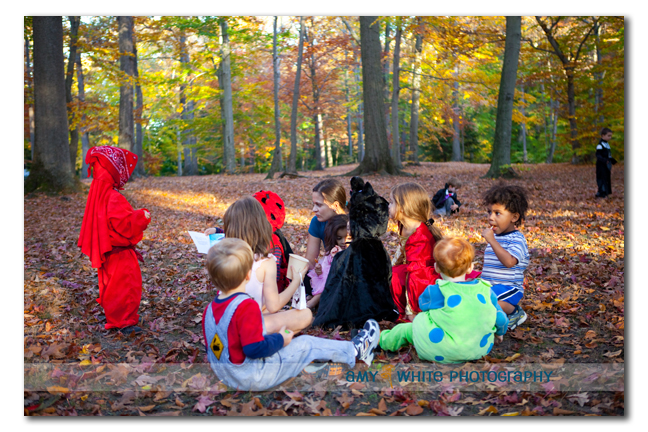 This little red-headed cutie is Alec is the son of a friend also named Amy.

(Alec and Amy were at Quinn\’s 2nd bday party looking like this – how quickly they grow.)

It was a fantastic day and I always enjoy spending time with my holistic mama friends.

A couple of weeks ago we enjoyed a beautiful fall day at a Touch-a-Truck event in Westfield.  Companies and organization bring their big trucks and the kids can climb in, over, and all around.  Let\’s just say that there are a lot of horns being honked!  Quinn had such a great time and I think this picture just sums it up.  The signature tongue wag with a great big smile and a butterfly flying overhead.  Does it get any better than this for a 3 year old boy?

We had our first Parent/Teacher\’s meeting this week at Quinn\’s preschool, Sundance School.  Don had planned to work from home that day so we all got to go 🙂  As you might imagine, it was very short and very sweet.   Quinn\’s teacher, Miss Bunny, thinks that Quinn is a very good boy (of course!) and loves having him in her class.   He is mostly quiet but likes to laugh and giggle in class.  He especially likes the stage where the class performs stories and has a fun time moving around.    We were also very pleased to find out that Miss Bunny has been a vegetarian for 20 years.  The school director, Miss Janet, calls herself a pesca-vegan because she doesn\’t eat meat or dairy but some fish for protein.   We are loving this hippy school 🙂

Whenever the school is closed, the Sundance Parent Association (SPA) plans an activity for the kids and/or families.  This week we went to one of our favorite places, Trailside Nature Center.  The weather was a little bit wet, but we dressed for the elements and had fun hiking in the rain.  I bet  you can\’t pick out our boy… 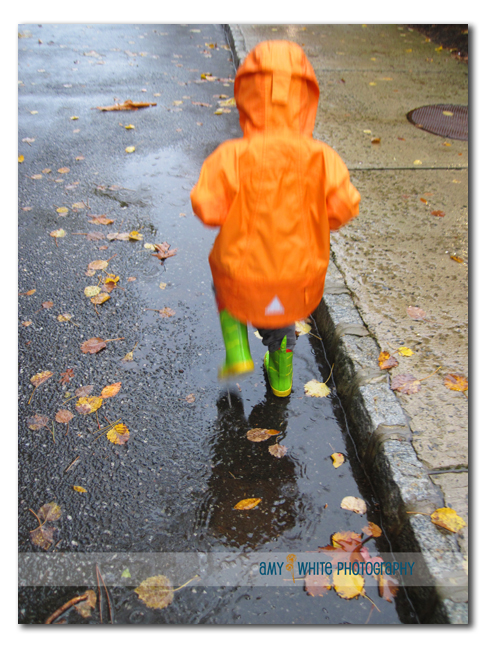